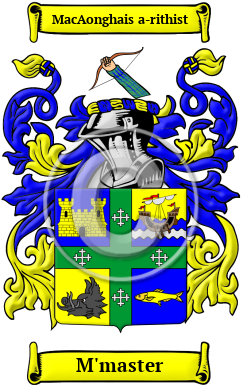 M'master is a name that evolved among the descendants of the people of the kingdom of Dalriada in ancient Scotland. It is a name for a person who worked as a cleric. The Middle Gaelic word magisder is borrowed from the Latin magister. The Gaelic form of the surname is Mac a Mhaighstir, which means son of the Master. [1]

Early Origins of the M'master family

The surname M'master was first found in Ardgour (Scottish Gaelic: Ard Ghobhar, meaning Height of the goats), where they were anciently derived from members of the Clan MacInnes, who changed their name.

"This surname is now found mainly in the shires of Dumfries and Wigtown, but was also the name of a sept in Ardgour traditionally said to have been dispossessed by Macleans in the fifteenth century." [1]

Early History of the M'master family

This web page shows only a small excerpt of our M'master research. Another 72 words (5 lines of text) covering the years 1300, 1433, 1498, 1582 and are included under the topic Early M'master History in all our PDF Extended History products and printed products wherever possible.

Spelling and translation were not standardized practices until the last few centuries. Spelling variations are extremely common among early Scottish names. M'master has been spelled MacMaster, McMaster, M'Master, Mac a' Mhaighstir (Gaelic) and many more.

More information is included under the topic Early M'master Notables in all our PDF Extended History products and printed products wherever possible.

Migration of the M'master family to Ireland

Some of the M'master family moved to Ireland, but this topic is not covered in this excerpt.
Another 88 words (6 lines of text) about their life in Ireland is included in all our PDF Extended History products and printed products wherever possible.

Migration of the M'master family

Scottish settlers arrived in many of the communities that became the backbones of the United States and Canada. Many stayed, but some headed west for the endless open country of the prairies. In the American War of Independence, many Scots who remained loyal to England re-settled in Canada as United Empire Loyalists. Scots across North America were able to recover much of their lost heritage in the 20th century as Clan societies and highland games sprang up across North America. Early immigration and passenger lists have documented some of the first M'masters to arrive on North American shores: James McMaster, who sailed to Boston in 1766; Elizabeth MacMaster sailed to New York in 1774; Angus MacMaster migrated from Lochaber, Inverness to Inverness County, Nova Scotia in 1802.