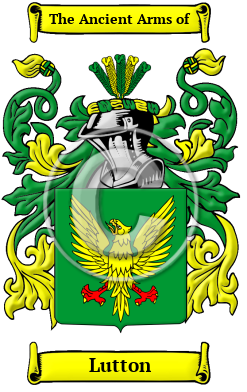 Early Origins of the Lutton family

The surname Lutton was first found in Bedfordshire, at Luton, once home of Luton Castle, a 12th-century castle, a timber motte-and-bailey structure built in 1139 but demolished in 1154. An excavation in 2002, revealed a steep ditch. Today Luton is a large town and unitary authority of Bedfordshire, but in the area Paleolithic encampments (about 250,000 years old) have been found. About the 6th century, it was a Saxon outpost on the River Lea. Luton is recorded in the Domesday Book [1] as Loitone and also as Lintone. One of the first records of the family was John de Luyton, rector of the church of St. Elphin, Warrington, Lancashire in 1343. [2]

Early History of the Lutton family

This web page shows only a small excerpt of our Lutton research. Another 81 words (6 lines of text) covering the years 1206, 1238, 1240 and 1253 are included under the topic Early Lutton History in all our PDF Extended History products and printed products wherever possible.

Spelling variations of this family name include: Luton, Luthon, Leuton, Leueton, Lewton, Louton and many more.

More information is included under the topic Early Lutton Notables in all our PDF Extended History products and printed products wherever possible.

Lutton migration to the United States +

Lutton Settlers in United States in the 19th Century

Lutton Settlers in United States in the 20th Century

Lutton Settlers in Australia in the 19th Century