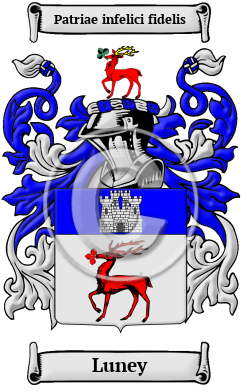 The Irish surnames in use today are underpinned by a multitude of rich histories. The name Luney originally appeared in Gaelic as O Luinigh.

Early Origins of the Luney family

The surname Luney was first found in County Tyrone (Irish:Tír Eoghain), the ancient territory of the O'Neills, now in the Province of Ulster, central Northern Ireland, where they held a family seat from ancient times.

Early History of the Luney family

This web page shows only a small excerpt of our Luney research. Another 61 words (4 lines of text) are included under the topic Early Luney History in all our PDF Extended History products and printed products wherever possible.

During the Middle Ages, a standardized literary language known by the general population of Ireland was a thing of fiction. When a person's name was recorded by one of the few literate scribes, it was up that particular scribe to decide how to spell an individual's name. So a person could have several spelling variations of his name recorded during a single lifetime. Research into the name Luney revealed many variations, including Lunney, Lunnie, Looney, Loney, Lunny, O'Lunney and others.

More information is included under the topic Early Luney Notables in all our PDF Extended History products and printed products wherever possible.

Luney migration to the United States +

The 18th century saw the slow yet steady emigration of Irish families to British North America and the United States. Those early Irish settlers that left their homeland were typically moderately well off: they were enticed by the promise of a sizable plot of land. However, by the 1840s, this pattern of immigration was gone: immigrants to North America were seeking refuge from the starvation and disease that the Great Potato Famine of that decade brought. The great numbers of Irish that arrived to the United States and the soon to be Canada were instrumental in their quick development as powerful industrial nations. An examination of early immigration and passenger lists uncovered many early immigrants bearing the name Luney:

Luney Settlers in United States in the 19th Century

Luney Settlers in United States in the 20th Century

Luney Settlers in Australia in the 19th Century