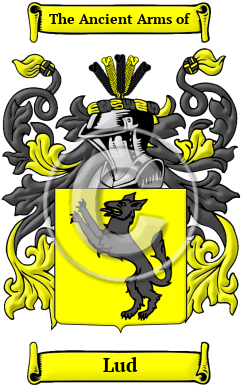 Early Origins of the Lud family

The surname Lud was first found in Lincolnshire at Louth, a market-town and parish. The ancient Latin name of this town was Luda, from its vicinity to the Lud, a small stream formed by the junction of two rivulets. [1] By the time of the Domesday Book of 1086, the parish was known as Lude, [2] and literally meant "Hlude, the loud one, the noisy stream." [3] The first record of the name was William of Louth (died 1298), a medieval Bishop of Ely. It is generally believed that he was born in Louth, but his lineage in unknown. After the coronation of King Edward I of England, the king appointed him cofferer of the wardrobe, on 18 October 1274. He was elected to the see of Ely on 12 May 1290 and consecrated on 1 October 1290. He was buried in Ely Cathedral. William of Louth's seal, is now kept in the British Museum.

Early History of the Lud family

More information is included under the topic Early Lud Notables in all our PDF Extended History products and printed products wherever possible.

Lud migration to the United States +

Lud Settlers in United States in the 19th Century