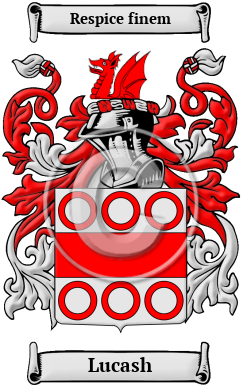 The name Lucash is of Anglo-Saxon origin and came from the baptismal name Luke. This surname followed the religious naming tradition, where surnames were bestowed in honor of religious figures or church officials. In Europe, the Christian Church was one of the most powerful influences on the formation of given names. Personal names derived from the names of saints, apostles, biblical figures, and missionaries are widespread in most European countries. In the Middle Ages, they became increasingly popular because people believed that the souls of the deceased continued to be involved in this world. They named their children after saints in the hope that the child would be blessed or protected by the saint. In this case the surname Lucash was taken from St. Luke the Evangelist.

Early Origins of the Lucash family

The surname Lucash was first found in Hertfordshire where they held a family seat from early times and their first records appeared on the census rolls taken by the ancient Kings of Britain to determine the rate of taxation of their subjects.

Early History of the Lucash family

Before English spelling was standardized a few hundred years ago, spelling variations of names were a common occurrence. Elements of Latin, French and other languages became incorporated into English through the Middle Ages, and name spellings changed even among the literate. The variations of the surname Lucash include Lucas, Lucass, Lukas and others.

Notables of this surname at this time include: Sir Thomas Lucas (1598-1649), a Royalist army officer; Sir Charles Lucas (1613-1648), an English soldier, a Royalist commander in the English Civil War; John Lucas, 1st Baron Lucas of Shenfield (1606-1671), an English industrialist and landowner; Charles Lucas, 2nd Baron Lucas...
Another 49 words (4 lines of text) are included under the topic Early Lucash Notables in all our PDF Extended History products and printed products wherever possible.

Migration of the Lucash family to Ireland

Some of the Lucash family moved to Ireland, but this topic is not covered in this excerpt.
Another 71 words (5 lines of text) about their life in Ireland is included in all our PDF Extended History products and printed products wherever possible.

Lucash migration to the United States +

Lucash Settlers in United States in the 19th Century