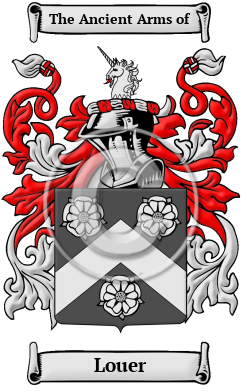 Early Origins of the Louer family

The surname Louer was first found in Cornwall where they held a family seat as Lords of the Manor of St.Tudy.

"The manor of Trelaske [in the parish of Lewannick, Cornwall] belonged to the Upton family prior to the Reformation ; but in the reign of Henry VIII. it was carried by co-heiresses to two brothers of the Lower family. Thomas Lower, Esq. who died in 1703, sold his moiety of the manor and the barton connected with it, to John Addis, Esq." [1]

"On the barton of Botonet [in the parish of Lezant, Cornwall] was formerly a seat of the Lowers, by whom it was inhabited in the days of Norden; but since that time the old mansion has been demolished." [1]

Early History of the Louer family

Spelling variations of this family name include: Lower, Louer, Lowar and others.

Another 31 words (2 lines of text) are included under the topic Early Louer Notables in all our PDF Extended History products and printed products wherever possible.

Louer migration to the United States +

Louer Settlers in United States in the 18th Century

Louer Settlers in United States in the 19th Century