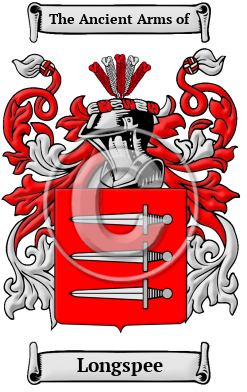 Early Origins of the Longspee family

The surname Longspee was first found in Yorkshire where they held a family seat as Lords of the Manor. The Saxon influence of English history diminished after the Battle of Hastings in 1066. The language of the courts was French for the next three centuries and the Norman ambience prevailed. But Saxon surnames survived and the family name was first referenced with William Longespee (c. 1176-1226), illegitimate son of King Henry II, nickname "Longespée" or "Long Sword."

Early History of the Longspee family

Spelling variations of this family name include: Longespee, Longspey, Longspy, Longknife, Lunbgspey and many more.

Outstanding amongst the family at this time was William Longespée, (c.1176-1226), illegitimate son of Henry II of England, 3rd Earl of Salisbury. He was an English noble, best remembered for his command of the English forces at the Battle of Damme, remaining loyal to King John. King Henry acknowledged him as his son and gave him the Honour of Appleby, Lincolnshire in 1188. During the reign of King John, he was then appointed High Sheriff of...
Another 75 words (5 lines of text) are included under the topic Early Longspee Notables in all our PDF Extended History products and printed products wherever possible.

Migration of the Longspee family