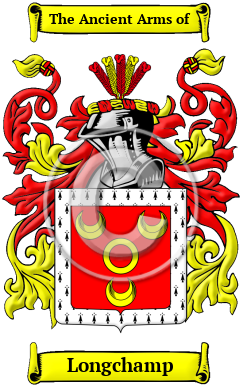 Early Origins of the Longchamp family

The surname Longchamp was first found in Herefordshire "where Henry I. granted to Hugh de Longchamp the castle and manor of Wilton, to hold by the service of two mens-at-arms in the Welsh wars: and the gift was confirmed to his son, Hugh II, by Henry II., the year after accession. The next heir Henry de Longchamp, Sheriff of Hereford in 1190, and of Wrocester in 1195, married Maude, sister of William de Cantilupe, and died in 1211. " [1]

"Longchamp gained the absolute confidence of the King, who on leaving England for the Crusade of 1189, appointed him and Hugh Pudsey, joint regents of the Kingdom." [1]

Ralph of Longchamp (c.1155-c.1215) was an English physician and natural philosopher who taught at Oxford and possibly in Paris.

Longshaw is an area within Billinge Higher End at the western boundary of the Metropolitan Borough of Wigan, in Greater Manchester. And Longshaws, is a township, in the parish of Long Horsley, union of Morpeth, in Northumberland. The Longshaw Estate is an area of moorland, woodland and farmland in the Peak District National Park, Derbyshire, England. The Estate has been held by the National Trust since 1931.

Early History of the Longchamp family

This web page shows only a small excerpt of our Longchamp research. Another 76 words (5 lines of text) covering the years 1455 and 1487 are included under the topic Early Longchamp History in all our PDF Extended History products and printed products wherever possible.

Spelling variations of this family name include: Longchamp, Longchampe, De Longchamp and many more.

More information is included under the topic Early Longchamp Notables in all our PDF Extended History products and printed products wherever possible.

Longchamp migration to the United States +

Longchamp Settlers in United States in the 18th Century

Longchamp Settlers in United States in the 19th Century

Longchamp Settlers in Canada in the 19th Century