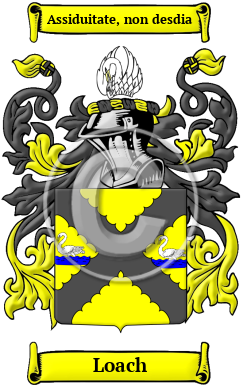 Early Origins of the Loach family

The surname Loach was first found in Peeblesshire (Gaelic: Siorrachd nam Pùballan), former county in South-central Scotland, in the present day Scottish Borders Council Area. They were from the locality known as Portmoore Loch in the parish of Eddleston in Peeblesshire. Literally, the name means "a place where rivers meet with a partial obstruction from a wooden dam. " [1] Later they acquired the lands of Gillemorestun in 1189. John Loch of Roxburghshire represented his Clan when he rendered homage in 1296 to King Edward I of England on his brief conquest of Scotland. Malise Lock was taken prisoner at Dunbar Castle in the same year. [2] Further to the south, the Hundredorum Rolls of 1273 listed: Geoffrey Loc, or Lock in Suffolk; and William Lock in Oxfordshire. [3] Kirby's Quest lists John Loke in Somerset, 1 Edward III. (during the first year of Edward III's reign.) [4]

Early History of the Loach family

Notable amongst the family at this time was George Lock, Bishop of Glasgow; Matthew Locke (ca. 1621-1677), an English Baroque composer and music theorist; and John Locke (1632-1704), known as the...
Another 30 words (2 lines of text) are included under the topic Early Loach Notables in all our PDF Extended History products and printed products wherever possible.

Loach migration to the United States +

Loach Settlers in United States in the 17th Century

Loach Settlers in United States in the 18th Century

Loach Settlers in United States in the 19th Century