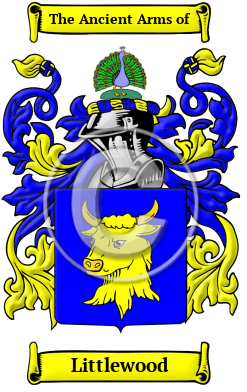 The lineage of the name Littlewood begins with the Anglo-Saxon tribes in Britain. It is a result of when they lived by a small grove of trees or near a grove of young trees or saplings. The surname Littlewood belongs to the class of topographic surnames, which were given to people who resided near physical features such as hills, streams, churches, or types of trees.

Early Origins of the Littlewood family

The surname Littlewood was first found in Lancashire where they held a family seat from early times and their first records appeared on the early census rolls taken by the early Kings of Britain to determine the rate of taxation of their subjects.

Early History of the Littlewood family

This web page shows only a small excerpt of our Littlewood research. Another 63 words (4 lines of text) are included under the topic Early Littlewood History in all our PDF Extended History products and printed products wherever possible.

More information is included under the topic Early Littlewood Notables in all our PDF Extended History products and printed products wherever possible.

Littlewood migration to the United States +

To escape the unstable social climate in England of this time, many families boarded ships for the New World with the hope of finding land, opportunity, and greater religious and political freedom. Although the voyages were expensive, crowded, and difficult, those families that arrived often found greater opportunities and freedoms than they could have experienced at home. Many of those families went on to make significant contributions to the rapidly developing colonies in which they settled. Early North American records indicate many people bearing the name Littlewood were among those contributors:

Littlewood Settlers in United States in the 17th Century

Littlewood Settlers in United States in the 18th Century

Littlewood Settlers in United States in the 19th Century

Littlewood Settlers in Canada in the 18th Century

Littlewood Settlers in Canada in the 19th Century

Littlewood Settlers in Australia in the 19th Century

Littlewood Settlers in New Zealand in the 19th Century

Littlewood Settlers in West Indies in the 17th Century

Historic Events for the Littlewood family +