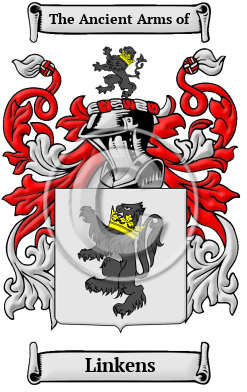 The name Linkens reached English shores for the first time with the ancestors of the Linkens family as they migrated following the Norman Conquest of 1066. The Linkens family lived in the city of Lincoln in Lincolnshire. The place-name is derived from the British name Lindo, which means lake, and the Latin word, colonia, which means settlement or colony. During the Roman occupation of England, the town was an important administrative center. Later, during the Middle Ages, it was a center for cloth manufacturing and is famous for the "Lincoln Green."

Another source claims the "name is derived from Lin in the Gaelic, Welsh, and Cornish-British, which signifies a pool, pond, or lake, and coln, the ridge or neck of a hill, so called from its situation, as it occupies the top and side of a steep hill on the river Witham, which here divides into three streams." [1]

Early Origins of the Linkens family

The surname Linkens was first found in Lincolnshire. One of the first record of the family was Alured de Lincoln, who came from Normandy with the Conqueror. He witnessed a charter in Normandy 1080 and just six years later in 1086 held a great barony in Lincolnshire and Bedfordshire. In 1130, Robert de Lincoln was listed in the Pipe Rolls, and in 1165 Alured de Lincoln held a barony of thirty fees. [2]

The Hundredorum Rolls of 1273 include: Robert de Linccolne in Nottinghamshire; and Richard de Linccolne in Huntingdonshire. Hugh de Lyncoln, fiscatar, was a Freemen of York, 3 Edward II (during the third year's reign of Edward II.) Daniel de Lyncoln was listed in the Writs of Parliament of 1324 and the Yorkshire Poll Tax Rolls of 1379 list Adam de Lincoln. [3]

Early History of the Linkens family

This web page shows only a small excerpt of our Linkens research. Another 91 words (6 lines of text) covering the years 1637, 1622, 1690 and 1637 are included under the topic Early Linkens History in all our PDF Extended History products and printed products wherever possible.

Anglo-Norman names tend to be marked by an enormous number of spelling variations. This is largely due to the fact that Old and Middle English lacked any spelling rules when Norman French was introduced in the 11th century. The languages of the English courts at that time were French and Latin. These various languages mixed quite freely in the evolving social milieu. The final element of this mix is that medieval scribes spelled words according to their sounds rather than any definite rules, so a name was often spelled in as many different ways as the number of documents it appeared in. The name was spelled Lincoln, Lincolne, Lincorne and others.

Another 47 words (3 lines of text) are included under the topic Early Linkens Notables in all our PDF Extended History products and printed products wherever possible.

Migration of the Linkens family

Because of the political and religious discontent in England, families began to migrate abroad in enormous numbers. Faced with persecution and starvation at home, the open frontiers and generally less oppressive social environment of the New World seemed tantalizing indeed to many English people. The trip was difficult, and not all made it unscathed, but many of those who did get to Canada and the United States made important contributions to the young nations in which they settled. Some of the first North American settlers with Linkens name or one of its variants: Elizabeth Lincoln, who settled in Virginia in 1635; Daniel Lincoln, who came to Hingham, MA in 1645; Robert Lincoln, who arrived in Boston in 1663; Ed Lincoln, who settled in Virginia in 1684.