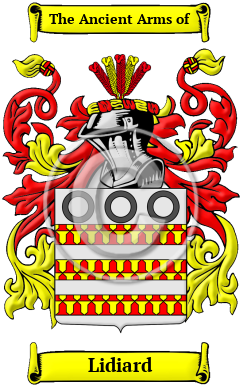 Early Origins of the Lidiard family

The surname Lidiard was first found in Lancashire at Lydiate, a village and civil parish of Halsall, union of Ormskirk, hundred of West Derby. Now part of Mersyside, the village dates back to the Domesday Book of 1086 where it was listed as Leiate and was held by Roger of Poitou at that time. [1] "In the reign of Richard II., this place was possessed by a family of the local name, whose heiress married into the Blackburn family; and an heiress of the latter conveyed Lydiate to Thomas, son of Sir John Ireland, of the Hutt, and Hale" [2]

Early History of the Lidiard family

This web page shows only a small excerpt of our Lidiard research. Another 132 words (9 lines of text) covering the years 1510, 1600, 1173 and 1439 are included under the topic Early Lidiard History in all our PDF Extended History products and printed products wherever possible.

More information is included under the topic Early Lidiard Notables in all our PDF Extended History products and printed products wherever possible.

Lidiard migration to the United States +

Lidiard Settlers in United States in the 19th Century