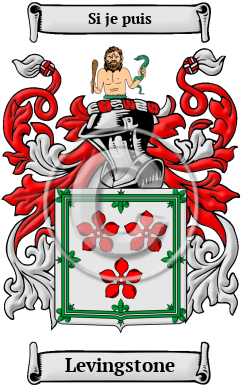 The Levingstone surname is habitational, derived from a place named Livingstone (Levingston) in the parish of Linlithgow, West Lothian.

"This place derives its name from an ancient castle called Livingstone Peel, which in the time of David I. was the baronial residence of the family of the Livingstones, whose descendants were elevated to the peerage by the title of Barons Livingstone, and of whom Alexander, the seventh Baron, was by James VI., in 1600, created Earl of Linlithgow.Of the ancient castle, there were some remains till the middle of the last century, consisting chiefly of the fosse and rampart; but they have entirely disappeared." [1]

The earliest progenitor of the Clan was Livingus, who was at least a noble. Some historians even say that he was a knight of the Hungarian court, who accompanied Margaret, wife of King Malcolm Ceanmore of Scotland, on her journey to Scotland. Other historians claim that Livingus was actually a Saxon who joined the train of Queen Margaret on her way through England and Scotland. In any case, records show he called his territories Levingestun, and that the church of "Leuiggestun," and "a half carucate of land and a toft" were granted to the Monks of Holyrood in the 12th century. [2]

Another reputable source has a slightly different bent on the origin: "A Saxon named Leving or Leuing appears to have settled in Scotland under David I. He certainly possessed a grant of the above-mentioned lands, which he called Levingestun (in Latin charters, villa Letting). Turstanus filius Leuig (for Leulg = Leving) in the reign of Malcolm IV granted to the monks of Holyrood the church of Leuiggestun, with a half carucate of land and a toft. Two sons of Turstan, Alexander and William, are mentioned as witnesses to two charters between the years 1165 and 1214, and as Turstan himself is also a witness to one of these charters he must have lived to a good old age." [3]

Early Origins of the Levingstone family

The surname Levingstone was first found in West Lothian. From this small beginning the Clan would grow into the nobility of Scotland and achieve the Earldoms of Callander, Linlithgow and Newburgh; the viscountcies of Kilsyth, Kinnaird and Teviot and the Lordships of Livingston.

Such was the power of this great Clan, that when William Douglas assumed the Regency of Scotland, from his father, the Earl of Douglas who became regent in 1437, he persuaded Lord Livingston to enter into a compact with him to become the Lieutenant of Scotland. When King James II came of age, William Douglas turned on the Livingston Clan, executed the Chief and seized many of their lands. For the next century the Livingston Clan, probably numbering over a thousand armed warriors, was a power unto itself in its home territories in Linlithgow, and they became hereditary keepers of the Royal Palace.

"The MacLeays of Appin, a small sept of the Stewarts of Appin, sometimes Englished their name as Livingstone, of whom was the celebrated missionary and traveller, David Livingstone. This name is used by Pennsylvania Germans as an Englishing of Loewenstein." [3]

Early History of the Levingstone family

Distinguished members of the family include Thomas Livingston (ca.1390-ca.1460), Abbot-elect of Newbattle, Abbot of Dundrennan, nominal Bishop of Dunkeld, advisor to Kings James I and James II of Scotland; James Livingstone (d. 1467), 1st Lord Livingston; James Livingston, Bishop of Dunkeld, who was elected Chancellor of Scotland in 1483; Alexander Livingstone (d. 1623), 7th Lord Livingston, who was created Earl of Linlithgow in 1600; James...
Another 64 words (5 lines of text) are included under the topic Early Levingstone Notables in all our PDF Extended History products and printed products wherever possible.

Migration of the Levingstone family to Ireland

Some of the Levingstone family moved to Ireland, but this topic is not covered in this excerpt.
Another 50 words (4 lines of text) about their life in Ireland is included in all our PDF Extended History products and printed products wherever possible.

Levingstone Settlers in Australia in the 19th Century

Motto: Si je puis
Motto Translation: If I can.