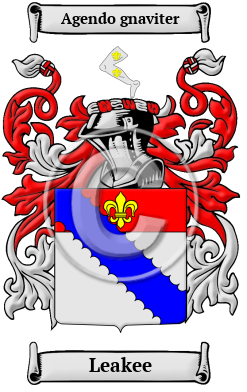 In ancient Anglo-Saxon England, the ancestors of the Leakee surname lived in one of the places that was called Leake.

Early Origins of the Leakee family

The surname Leakee was first found in either Lincolnshire, Yorkshire or Nottinghamshire which all have parishes names Leake. For some of the first listings of the family, we must look to Lincolnshire where the Hundredorum Rolls of 1273 list the following: John de Lek; Roger de Leke; and Teobald de Lek as all living in that shire at that time. [1] Willie's Lyke-Wake is a Child Ballad, one of 305 traditional ballads from England and Scotland, and their American variants listed in the 1904 Houghton Mifflin edition. Lyke-Wake Dirge is a traditional English song that is thought to have originated in the Yorkshire area.

Early History of the Leakee family

It is only in the last few hundred years that the English language has been standardized. For that reason, early Anglo-Saxon surnames like Leakee are characterized by many spelling variations. As the English language changed and incorporated elements of other European languages, even literate people changed the spelling of their names. The variations of the name Leakee include: Leake, Leak, Leek, Leeke, Leyke and others.

Notables of this surname at this time include: Francis Leke, 1st Earl of Scarsdale (1581-1655) fought for the Royalist cause in the English Civil War; Sir Francis Leke, 1st Baronet (1627-1679), an English soldier, administrator and Member of Parliament, High Sheriff of Nottinghamshire for 1660; William Leake, the father (died...
Another 49 words (4 lines of text) are included under the topic Early Leakee Notables in all our PDF Extended History products and printed products wherever possible.

Migration of the Leakee family

Many English families tired of political and religious strife left Britain for the new colonies in North America. Although the trip itself offered no relief - conditions on the ships were extremely cramped, and many travelers arrived diseased, starving, and destitute - these immigrants believed the opportunities that awaited them were worth the risks. Once in the colonies, many of the families did indeed prosper and, in turn, made significant contributions to the culture and economies of the growing colonies. An inquiry into the early roots of North American families has revealed a number of immigrants bearing the name Leakee or a variant listed above: Augustine Leak, who came to Virginia in 1623; Winifred Leak, who arrived in Virginia in 1623; John Leak, who settled in Virginia in 1635; John Leak, who arrived in Barbados in 1658.