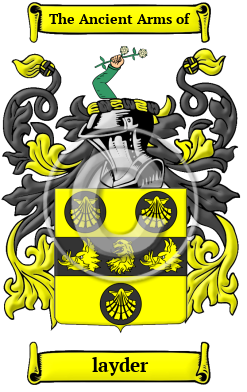 The name layder finds its origins with the ancient Anglo-Saxons of England. It was given to one who worked as a drover; a driver of a cart or vehicle carrying cargo of one kind or another. Further research revealed that the name is derived from the Old English word lædere, which meant leader, because of course the driver had to lead the horses pulling the cart. [1] Occupational names that were derived from the common trades of the medieval era transcended European cultural and linguistic boundaries. Occupational names have remained fairly common in the modern period. This is attested to by the continuing appearance of occupational suffixes at the end of many English surnames. Some of these suffixes include: herd, monger, maker, hewer, smith, and wright. Similarly, surnames of office, which include military, judicial, papal and other positions of authority, are widespread throughout Europe. Those who were involved in the military, or feudal armies, were given names such as the English surname Archer, the French name Chevalier and the German name Jeger, which means hunter. Names that were derived from judicial and papal titles, such as Bailiff, Squire and Abbott, are still commonly seen with the same surname spelling today.

Early Origins of the layder family

The surname layder was first found in Durham where one of the first records of the name was Ralph Ledere who was listed in the Assize Rolls of 1243. [2]

Early History of the layder family

This web page shows only a small excerpt of our layder research. Another 70 words (5 lines of text) covering the years 1243, 1553 and 1558 are included under the topic Early layder History in all our PDF Extended History products and printed products wherever possible.

The English language only became standardized in the last few centuries; therefore, spelling variations are common among early Anglo-Saxon names. As the form of the English language changed, even the spelling of literate people's names evolved. layder has been recorded under many different variations, including Leader, Leeder and others.

More information is included under the topic Early layder Notables in all our PDF Extended History products and printed products wherever possible.

Migration of the layder family to Ireland

Some of the layder family moved to Ireland, but this topic is not covered in this excerpt. More information about their life in Ireland is included in all our PDF Extended History products and printed products wherever possible.

Migration of the layder family

For many English families, the political and religious disarray that shrouded England made the far away New World an attractive prospect. On cramped disease-ridden ships, thousands migrated to those British colonies that would eventually become Canada and the United States. Those hardy settlers that survived the journey often went on to make important contributions to the emerging nations in which they landed. Analysis of immigration records indicates that some of the first North American immigrants bore the name layder or a variant listed above: Richard Leader, who settled at Lynn Massachusetts in 1630; William Leader settled in Virginia in 1677; Anne Leader settled in Savannah, Georgia in 1825..