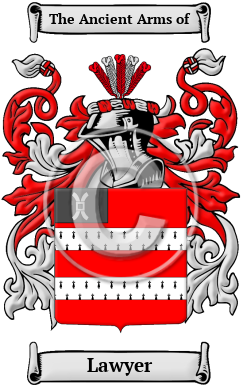 Early Origins of the Lawyer family

The surname Lawyer was first found in the Rhine Valley, where the family has been a prominent family for centuries, and held a family seat with domains, estates and manors. The family were well established in the region of Strasburg north to the coast and several members of the family distinguished themselves through their contributions toward the community and their religious activities. They and were rewarded with lands, titles and letters patent confirming their nobility. The family was originally from Albigensia and their original name was Raymond. They held a family seat near Montpellier. Pierre Raymond de Layard left France for England at the Edict of Nantes. He was appointed a Major in General Verey's Regiment of Foot and joined him at the Battle of the Boyne in Ireland. The family settled at Riverssdale outside Dublin. Some of the family returned to England where they became Member of Parliament or distinguished army officers. Charles Peter Layard was Dean of Bristol.

Early History of the Lawyer family

This web page shows only a small excerpt of our Lawyer research. Another 44 words (3 lines of text) are included under the topic Early Lawyer History in all our PDF Extended History products and printed products wherever possible.

More information is included under the topic Early Lawyer Notables in all our PDF Extended History products and printed products wherever possible.

In the United States, the name Lawyer is the 6,309th most popular surname with an estimated 4,974 people with that name. [1]

Lawyer migration to the United States +

Lawyer Settlers in United States in the 17th Century

Lawyer Settlers in United States in the 19th Century

Lawyer Settlers in New Zealand in the 19th Century