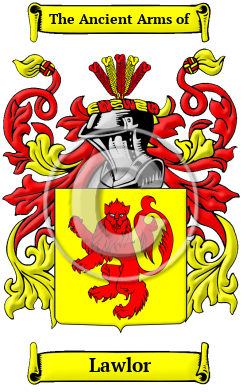 The family name Lawlor has an intrinsic connection to the Gaelic culture of Ireland. The original Gaelic form of the name Lawlor is O Leathlobhair, which is derived from the words leath, which means half, and lobhar, which means sick person or leper.

Early Origins of the Lawlor family

The surname Lawlor was first found in County Leix (Irish: Laois) formerly known as Queen's County, located in central Ireland, in Leinster Province, where they held a family seat from ancient times.

Early History of the Lawlor family

This web page shows only a small excerpt of our Lawlor research. Another 63 words (4 lines of text) covering the year 1854 is included under the topic Early Lawlor History in all our PDF Extended History products and printed products wherever possible.

Pronunciation, rather than spelling, was what guided scribes and church officials in recording names, a practice that often led to the misleading result of one person's name being recorded under several different spellings. Numerous spelling variations of the surname Lawlor are preserved in documents that were examined for evidence of the family's history. The various spellings of Lawlor included Lawlor, Lalor, O'Lalor, O'Lawlor and others.

Prominent amongst the family at this time was Patrick Lalor, M.P. for Leix, and his sons, James Fintan, writer and revolutionary, Peter, who led the miners revolt at Eureka, Australia in 1854 and later became speaker of...
Another 37 words (3 lines of text) are included under the topic Early Lawlor Notables in all our PDF Extended History products and printed products wherever possible.

Lawlor migration to the United States +

North America received thousands of Irish immigrants from the English-ruled Ireland during the 19th century. Once in the United States or what would become Canada, these immigrants quickly contributed to the ongoing settling and industrialization processes. The largest influx of Irish settlers occurred with Great Potato Famine of the late 1840s. An exhaustive examination of immigrant and passenger lists has shown many early immigrants bearing the surname of Lawlor:

Lawlor Settlers in United States in the 19th Century

Lawlor Settlers in Canada in the 19th Century

Lawlor Settlers in Australia in the 19th Century

Lawlor Settlers in New Zealand in the 19th Century

Historic Events for the Lawlor family +