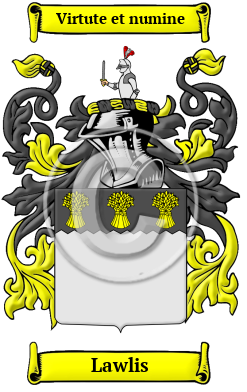 The surname Lawlis is derived from the Old English word "laweles," which means "lawless" and is ultimately derived from the Old English word "laghles," which means "outlaw." As a surname, Lawlis came from a nickname for a person who was an outlaw, or was uncontrolled or unrestrained. The Gaelic form of the surname Lawlis is Laighléis.

Early Origins of the Lawlis family

The surname Lawlis was first found in Glamorganshire (Welsh: Sir Forgannwg), a region of South Wales, anciently part of the Welsh kingdom of Glywysing, where they held a family seat from very ancient times, some say well before the Norman Conquest and the arrival of Duke William at Hastings in 1066 A.D.

Early History of the Lawlis family

Church officials and medieval scribes often simply spelled names as they sounded. As a result, a single person's name may have been recorded a dozen different ways during his lifetime. Spelling variations for the name Lawlis include: Lawless, Lovelace, Lovelass, Loveless and others.

Notable amongst the family up to this time was Richard Lovelace, 1st Baron Lovelace (1564-1634), of Hurley in the County of Berkshire, English MP and peer, High Sheriff of Berkshire (1610) and High Sheriff of Oxfordshire (1626); John Lovelace, 2nd Baron Lovelace (1616-1670), British peer; Richard Lovelace (1618-1657), an English poet in...
Another 51 words (4 lines of text) are included under the topic Early Lawlis Notables in all our PDF Extended History products and printed products wherever possible.

Migration of the Lawlis family

Ireland went through one of the most devastating periods in its history with the arrival of the Great Potato Famine of the 1840s. Many also lost their lives from typhus, fever and dysentery. And poverty was the general rule as tenant farmers were often evicted because they could not pay the high rents. Emigration to North America gave hundreds of families a chance at a life where work, freedom, and land ownership were all possible. For those who made the long journey, it meant hope and survival. The Irish emigration to British North America and the United States opened up the gates of industry, commerce, education and the arts. Early immigration and passenger lists have shown many Irish people bearing the name Lawlis: James Lawless who settled in Virginia in 1739; Daniel, James, John, Joseph, Michael, Miles, Patrick and Walter Lawless, all arrived in Philadelphia, Pennsylvania between 1840 and 1860.