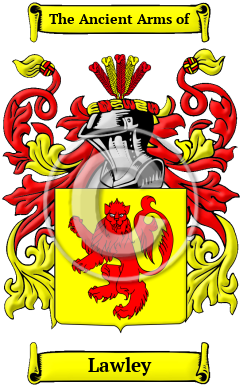 The family name Lawley has an intrinsic connection to the Gaelic culture of Ireland. The original Gaelic form of the name Lawley is O Leathlobhair, which is derived from the words leath, which means half, and lobhar, which means sick person or leper.

Early Origins of the Lawley family

The surname Lawley was first found in County Leix (Irish: Laois) formerly known as Queen's County, located in central Ireland, in Leinster Province, where they held a family seat from ancient times.

Early History of the Lawley family

This web page shows only a small excerpt of our Lawley research. Another 63 words (4 lines of text) covering the year 1854 is included under the topic Early Lawley History in all our PDF Extended History products and printed products wherever possible.

In the days before Gaelic or English gained any significant semblance of standardization, the scribes who created documents simply recorded names as they sounded. Consequently, in the Middle Ages many people were recorded under different spellings each time their name was written down. Research into the Lawley family history revealed numerous spelling variations of the name, including Lawlor, Lalor, O'Lalor, O'Lawlor and others.

Prominent amongst the family at this time was Patrick Lalor, M.P. for Leix, and his sons, James Fintan, writer and revolutionary, Peter, who led the miners revolt at Eureka, Australia in 1854 and later became speaker of...
Another 37 words (3 lines of text) are included under the topic Early Lawley Notables in all our PDF Extended History products and printed products wherever possible.

In the United States, the name Lawley is the 12,387th most popular surname with an estimated 2,487 people with that name. [1]

Lawley migration to the United States +

In the 18th and 19th centuries, hundreds of thousands of Irish immigrants landed on North American shores. Although many of them were merely looking for a free plot of land and living of their very own, many later immigrants were desperately fleeing an overcrowded land that did not have sufficient food for its inhabitants. The exodus from Ireland was greatest during the 1840s when the Great Potato Famine had stricken the island. Although this large influx of Irish was unpopular with the great majority of people already established within the major centers, these Irish were critical to the speedy development of the United States and those colonies that would eventually become known as Canada. These immigrants provided the cheap labor required to build modern roads, bridges, canals, and railways. Research of passenger and immigration lists has shown a number of immigrants to North America baring the name of Lawley:

Lawley Settlers in United States in the 17th Century

Lawley Settlers in United States in the 18th Century

Lawley Settlers in United States in the 19th Century

Lawley Settlers in Australia in the 19th Century