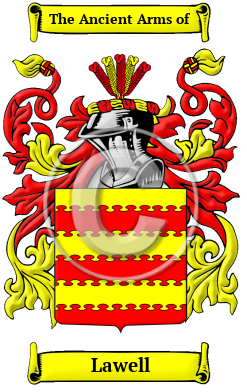 The Lawell surname is derived from the Norman French word "lou," meaning "wolf," with the diminutive suffix "el." [1] [2]

Early Origins of the Lawell family

The surname Lawell was first found in Somerset. Robert, Lord of Breherval and Yvery in Normandy is regarded as the progenitor of this family. His father was Eudes, sovereign Duke of Brittany. His is listed in the Roll of Battle Abbey and received from the Conqueror a grant of the Lordships of Kary and Harpetre, in the county of Somerset. He eventually returned to his native Duchy and died a monk in the abbey of Bec, leaving three sons. The eldest, one Ascelin Gouel de Perceval succeeded his father as Lord of Breherval. As a violent man, he acquired the surname "Lupus." In turn his son was surnamed "Lupellus," or little wolf which was softened to "luvel." He had five sons; one of which was Henry, ancestor of Lords Lovel of Kary. [3]

Early History of the Lawell family

This web page shows only a small excerpt of our Lawell research. Another 106 words (8 lines of text) covering the years 1454, 1487, 1483, 1631 and 1713 are included under the topic Early Lawell History in all our PDF Extended History products and printed products wherever possible.

Notable among the family at this time was Francis Lovell, (1454-c. 1487), friend and supporter of Richard III, made Viscount Lovell on January 4th 1483; he...
Another 26 words (2 lines of text) are included under the topic Early Lawell Notables in all our PDF Extended History products and printed products wherever possible.

Migration of the Lawell family to Ireland

Some of the Lawell family moved to Ireland, but this topic is not covered in this excerpt.
Another 31 words (2 lines of text) about their life in Ireland is included in all our PDF Extended History products and printed products wherever possible.

Lawell migration to the United States +

Lawell Settlers in United States in the 19th Century