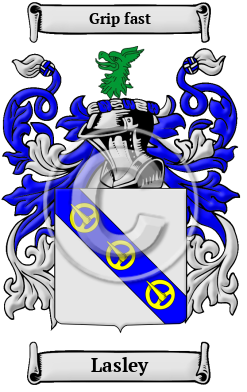 The ancestors of the first family to use the name Lasley lived among the ancient Scottish people called the Picts. The Lasley family lived in the barony of Leslie in the county of Aberdeen. The surname Lasley belongs to the category of habitation names, which are derived from pre-existing names for towns, villages, parishes, or farmsteads.

Early Origins of the Lasley family

The surname Lasley was first found in Aberdeenshire (Gaelic: Siorrachd Obar Dheathain), a historic county, and present day Council Area of Aberdeen, located in the Grampian region of northeastern Scotland, where they were recorded as a family of great antiquity seated on the lands of Leslie. "This place is said to have derived its name from a family who held the lands so early as the eleventh century." [1]

It is generally believed the family was descended from Bartholomew Leslyn, son of Walter de Leslyn, a Flemish knight who attended Queen Margaret when she arrived to marry King Malcolm of Scotland in 1067. [2] [3]

According to legend, the wife of King Malcolm III was thrown from her horse while crossing a river and nearly drowned, but Leslyn, gripping the horses bridle, saved her. She frequently cautioned him to 'grip fast' and afterwards commanded that he retain those words as his family motto. He later married the sister of Malcolm Ceanmore, and so was appointed Governor of Edinburgh Castle and made Lord Leslie. [3]

Malcolm Leslie of Garioch in Aberdeenshire, son of Bartolf, received a feudal charter confirming his lands from a grant made to his name-father, Lord Leslie. Malcolm's grandson, Sir Andrew de Lesly, was one of the signatories of the 1320 'Arbroath Declaration of Independence' to the Pope, which affirmed Scotland's sovereignty and included the words: "as long as one hundred Scotsmen still live they would never submit to English rule."

Another source claims the family "trace their origin to Bartholomew, a Flemish chief, who settled with his followers in the district of Garioch, in Aberdeenshire, in the reign of William the Lion. He took the name of De Lesley from the place where he settled. The heralds, however, have an old legend representing the first man of the family as having acquired distinction and a name at once, by overcoming a knight in battle, at a spot between a less lee (meadow) and a greater." [4]

Whichever origin the reader chooses, all agree that one of the first records of the family was "Earl David, brother of William the Lion, granted c. 1171-1199 the lands of Lesslyn in the Garioch to Malcolm son of Bartholf. " [5]

As far as the origin of the Coat of Arms is concerned perhaps this quote will shed some light: "Sir Norman de Lechelyn of Aberdeenshire rendered homage in 1296. His seal bears six shields in a circle conjoined in base, each charged with 3 round buckles on a bend." [5] It's a little different that the one anciently used by the family but it is significant in that it notes that the family was using a variant of the same as far back as the 13th century.

Early History of the Lasley family

In the Middle ages, spelling and translation were not yet regulated by any general rules. spelling variations in names were common even among members of one family unit. Lasley has appeared Leslie, Lesley, Lessely, Lessley, Lesslie and others.

Notable amongst the Clan at this time was John Lesley (1527-1596) Scottish bishop, historian, and statesman, ecclesiastical adviser to Mary Queen of Scots; Henry Leslie (1580-1661) Scottish-born, Church of Ireland Bishop of Down and Connor (1635 to 1661) and briefly Bishop of Meath (1661); John Leslie (1571-1671), a Scottish royalist bishop of Clogher, known as the "fighting bishop" for his resistance to the Irish rebellion of 1641 and the parliamentarian forces; and...
Another 71 words (5 lines of text) are included under the topic Early Lasley Notables in all our PDF Extended History products and printed products wherever possible.

In the United States, the name Lasley is the 6,357th most popular surname with an estimated 4,974 people with that name. [6]

Migration of the Lasley family to Ireland

Some of the Lasley family moved to Ireland, but this topic is not covered in this excerpt.
Another 86 words (6 lines of text) about their life in Ireland is included in all our PDF Extended History products and printed products wherever possible.

Lasley migration to the United States +

Faced by this persecution and the generally unstable political climate of those days, many Scots chose to leave their homeland for Ireland, Australia, and North America in search of greater opportunity and freedom. The colonies across the Atlantic were the most popular choice, but a passage there was neither cheap nor easily suffered. Passengers arrived sick and poor, but those who made it intact often found land and more tolerant societies in which to live. These brave settlers formed the backbone of the burgeoning nations of Canada and the United States. It is only this century that the ancestors of these families have begun to recover their collective identity through the patriotic highland games and Clan societies that have sprung up throughout North America. Research into early immigration and passenger lists revealed many immigrants bearing the name Lasley:

Lasley Settlers in United States in the 17th Century

Lasley Settlers in United States in the 20th Century