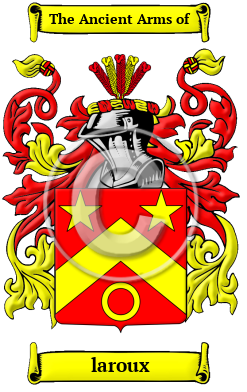 From the historical and enchanting region of France emerged a multitude of notable family names, including that of the distinguished laroux family. Originally, the people in this region went by one (personal) name. Surnames evolved during the Middle Ages when people began to assume an extra name to avoid confusion and to further identify themselves. These names then began to become "fixed" or hereditary between the generations. One of the types of names adopted as surnames were those derived from nicknames. Nicknames, or "eke-names," were an added name that generally reflected some physical characteristics or other attribute of the person that used the name. The laroux surname derives from the Old French word "rous," meaning "red," or "red-haired;" and as such was a nickname for someone with red hair, or perhaps for a person with a ruddy or reddish complexion, or who dressed habitually in the colour red.

Early Origins of the laroux family

The surname laroux was first found in Périgord, where this impressive family held a family seat since ancient times. Another branch of the family held lands near Rouen in Normandy since 1165. Ralph le Roux was sent in 1119 by Henry I to the aid of Ralph de Guader and in 1120 was one of the nobles who died with Prince Henry in the Blanche. The English line descends from Turchil Rufus or Le Rous, who landed in England in 1066 and held lands in Norfolk. [1]

Early History of the laroux family

More information is included under the topic Early laroux Notables in all our PDF Extended History products and printed products wherever possible.

laroux migration to the United States +

laroux Settlers in United States in the 18th Century

laroux Settlers in United States in the 19th Century