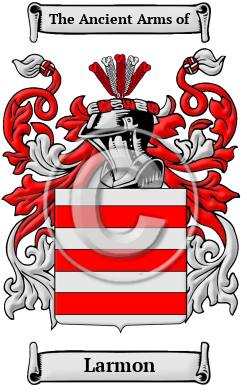 Early Origins of the Larmon family

The surname Larmon was first found in Provence, where the family has held a family seat since ancient times.

The name was first recorded in the cartulary of the abbey of Saint-Bertain, during the year of 806. Throughout the centuries the family prospered, expanded and grew in size. The family, as a noble family of France, confirmed with letters of patent and heraldic cap, contributed largely on the political as well as the cultural scene of the regions in which they settled. In return for their contributions many of the different branches were granted titles of nobility.

In the 1700's, François Armand, Lawyer, became a magistrate in his community as reward for his great services in the field of law. Participating in the events of the times, he was elected deputy of Tiers at the Estates General in 1789. Through the years the branches of the family became more prominent and achieved acclaim through their valuable and constant contributions to the community in which they lived. Joseph Marie Rose Armand, showing the same interest in the law field, rose to the rank of magistrate and legislator in recognition of his outstanding performance. In 1807, he was promoted to President of the Tribunal of Aoste, a place which he occupied until 1814.

To this day, the province of Provence is proud to have been the ancestral seat of such an important family.

Early History of the Larmon family

This web page shows only a small excerpt of our Larmon research. Another 48 words (3 lines of text) covering the years 1700, 1789, 1807, and 1814 are included under the topic Early Larmon History in all our PDF Extended History products and printed products wherever possible.

Notable amongst the names at this time was François Armand, Magistrate, Deputy of Tiers; Marie Armande de La Trémoille (1677-1717), a French noblewoman and Princess of Turenne; and Nicolas Herman (c. 1614-1691), known as Brother Lawrence of the Resurrection, lay brother in...
Another 42 words (3 lines of text) are included under the topic Early Larmon Notables in all our PDF Extended History products and printed products wherever possible.

In the United States, the name Larmon is the 14,570th most popular surname with an estimated 2,487 people with that name. [1]

Migration of the Larmon family

Some of the first settlers of this family name or some of its variants were: Jacques Armand settled in Louisiana in 1757; Mathiaus Armand settled in Philadelphia in 1856; Mr Armand, aged 30; settled with his wife and child in New Orleans in 1822.