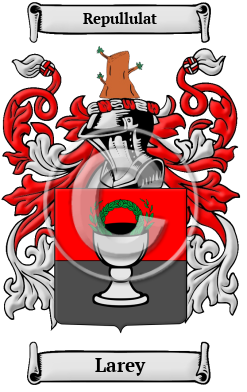 Early Origins of the Larey family

The surname Larey was first found in Dumfriesshire (Gaelic: Siorrachd Dhùn Phris), a Southern area, bordering on England that today forms part of the Dumfries and Galloway Council Area. "Laurieston in the parish of Balmaghie, stewartry of Kirkcudbright takes its name from William Kennedy Laurie, Esq., proprietor of the lands on which it is built, near Lochinbren, a sheet of water abounding with trout. " [1]

Early History of the Larey family

Notable amongst the family at this time was Sir Robert Laurie of Maxwelltown; Gawen Lawrie (died 1687), 2nd Deputy Governor of East New Jersey (1683-1686); Robert Laurie (died 1677), Church of Scotland prelate...
Another 33 words (2 lines of text) are included under the topic Early Larey Notables in all our PDF Extended History products and printed products wherever possible.

Migration of the Larey family to Ireland

Some of the Larey family moved to Ireland, but this topic is not covered in this excerpt.
Another 118 words (8 lines of text) about their life in Ireland is included in all our PDF Extended History products and printed products wherever possible.

Larey migration to the United States +

Larey Settlers in United States in the 17th Century

Larey Settlers in United States in the 18th Century

Larey Settlers in United States in the 19th Century