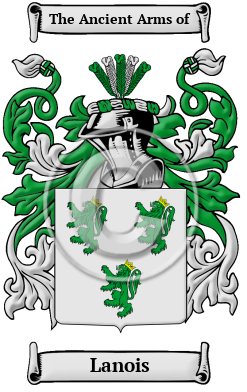 The Lanois surname is a habitational name taken on from a place name such as Lannoy, in Nord departement, or Lannoy in Oise department, both in northern France.

Early Origins of the Lanois family

The surname Lanois was first found in Picardy (French: Picardie), where the family has been a prominent family for centuries, and held a family seat with lands and manor. This noble family were well established in the region of Picardie and several members of the family distinguished themselves through their contributions toward the community in which they lived and were rewarded with lands, titles and letters patent confirming their nobility. They were to become Princes of Rheina Wolbeck and Princes de Sulmone.

Early History of the Lanois family

Notable amongst the family name at this period was Robert de Lannoy (c. 1292-1356), French sculptor and painter; Colinet de Lannoy (died before 1497), a French Renaissance composer; Guillebert de Lannoy (1386-1462), a Flemish traveler and diplomat, Chamberlain to the duke of Burgundy, Governor of the fort of Sluys, and a knight of the Golden Fleece; Hugo van...
Another 58 words (4 lines of text) are included under the topic Early Lanois Notables in all our PDF Extended History products and printed products wherever possible.

Migration of the Lanois family

Some of the first settlers of this family name or some of its variants were: Philippe DeLannoye, who arrived in Massachusetts in 1621; Jeanne DeLannoy, who settled in Carolina in 1697; Philipp Lannoy, one of the Hessian troops in the American War for Independence, who settled in Quebec in 1781.