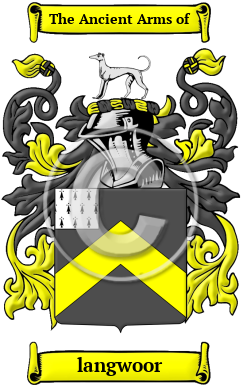 Early Origins of the langwoor family

The surname langwoor was first found in East Dunbartonshire at Langmuir, near Kirkintilloch, a town and former royal burgh about 8 miles (13km) northeast of Glasgow. Alternatively the name could have been derived from Longmore, near Ayr. [1] One of the first records of the name was Elice de la Longmore and Robert de Langemore of Ayrshire who rendered homage to King Edward I in his invasion of Scotland in 1296. [1]

Early History of the langwoor family

This web page shows only a small excerpt of our langwoor research. Another 119 words (8 lines of text) covering the years 1417, 1424, 1524, 1477 and 1663 are included under the topic Early langwoor History in all our PDF Extended History products and printed products wherever possible.

More information is included under the topic Early langwoor Notables in all our PDF Extended History products and printed products wherever possible.

Migration of the langwoor family

Some of the first settlers of this family name or some of its variants were: John Langmore settled in Plymouth in 1620; Anne Longmore settled in Virginia in 1739; John Longmore arrived in Philadelphia in 1876.