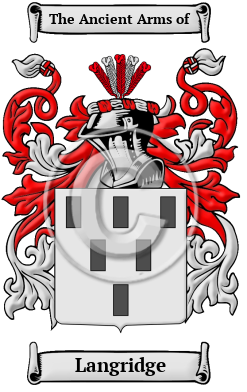 Early Origins of the Langridge family

The surname Langridge was first found in Somerset at Langridge, a civil parish and small village that dates back to the Domesday Book where it was listed as Lancheris. [1] Literally, the place name means "long ridge," from the Old English words "lang" + hrycg." [2]

St Mary Magdalene's Church at Langridge dates back to the 12th century. "The church is an ancient structure with a square tower, and consists of a nave and chancel, between which is a highly-enriched Norman arch; there is a Norman arch of plainer character in the south porch. In rebuilding the rectoryhouse a few years since, several coffins and skulls, and a silver-mounted battle-axe, were discovered." [3] "The Langridges of Sussex appear to be indigenous to that county, and the name De Langrigg is found there in the 14th century." [4]

Langbridge Manor is a manor house on the Isle of Wight. It is related to Ashey manor (also on the Isle of Wight) as it seems that both were granted in the early 13th century. As of 1912, it was the property of Mr. Edward Carter, who purchased it in 1906.

Early History of the Langridge family

This web page shows only a small excerpt of our Langridge research. Another 77 words (6 lines of text) are included under the topic Early Langridge History in all our PDF Extended History products and printed products wherever possible.

Langridge has been spelled many different ways. Before English spelling became standardized over the last few hundred years, spelling variations in names were a common occurrence. As the English language changed in the Middle Ages, absorbing pieces of Latin and French, as well as other languages, the spelling of people's names also changed considerably, even over a single lifetime. Many variations of the name Langridge have been found, including Langridge, Langrich, Langriche, Langrick, Langrige, Langredge, Langrish, Langrith and many more.

More information is included under the topic Early Langridge Notables in all our PDF Extended History products and printed products wherever possible.

Migration of the Langridge family to Ireland

Some of the Langridge family moved to Ireland, but this topic is not covered in this excerpt. More information about their life in Ireland is included in all our PDF Extended History products and printed products wherever possible.

Langridge migration to the United States +

In an attempt to escape the chaos experienced in England, many English families boarded overcrowded and diseased ships sailing for the shores of North America and other British colonies. Those families hardy enough, and lucky enough, to make the passage intact were rewarded with land and a social environment less prone to religious and political persecution. Many of these families became important contributors to the young colonies in which they settled. Early immigration and passenger lists have documented some of the first Langridges to arrive on North American shores:

Langridge Settlers in United States in the 17th Century

Langridge Settlers in United States in the 19th Century

Langridge Settlers in Australia in the 19th Century

Langridge Settlers in New Zealand in the 19th Century

Langridge Settlers in West Indies in the 17th Century