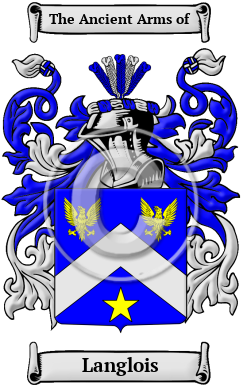 The Langlois family's name is derived from that coastal landscape of Medieval France known as Normandy. Their name originated with an early member who was a Norman resident of English extraction. The name Langlois refers to the Angles, a race who once inhabited England, and after whom the country is named. Rendered l'Anglais in modern French, the name essentially means "the English". [1]

Early Origins of the Langlois family

The surname Langlois was first found in Normandy (French: Normandie), the former Duchy of Normandy, where this distinguished family held a family seat at Motteville, and were members of the aristocracy of that region.

Noel Langlois, born in 1606, was a fisherman and pilot from France that settled in Beauport, Quebec in 1634. He married Françoise Garnier on 25th July 1634 and together they had ten children. After the death of his first wife he married Marie Crevet on 27th July 1666. He died in Beauport on 15th July 1684. Noel is recorded as the first ancestor of the Langlois family. [2]

Early History of the Langlois family

This web page shows only a small excerpt of our Langlois research. Another 72 words (5 lines of text) are included under the topic Early Langlois History in all our PDF Extended History products and printed products wherever possible.

There were a great number of spelling variations in French surnames. One reason for this was the wide variety of cultural influences present in France during the early development of the French language. The many spelling variations of the name include Langlois, Langloi, Langlais, Langlo, Langloys, Langois, L'Angloi, L'Anglais, L'Anglo, L'Angloys, L'Angloi, L'Anglois, Anglois, Angloi, Anglais, Anglo, Angloy and many more.

Another 37 words (3 lines of text) are included under the topic Early Langlois Notables in all our PDF Extended History products and printed products wherever possible.

Langlois migration to the United States +

Migration from France to New France or Quebec as it was now more popularly called, continued from France until it fell in 1759. By 1675, there were 7000 French in Quebec. By the same year the Acadian presence in Nova Scotia, New Brunswick and Prince Edward Island had reached 500. In the treaty of Utrecht, the Acadians were ceded by France to Britain in 1713. In 1755, 10,000 French Acadians refused to take an oath of allegiance to England and were deported. They found refuge in Louisiana. In 1793, the remaining French in these provinces came under British rule. Meanwhile, in Quebec, the French race flourished, founding in Lower Canada, one of the two great solitudes which became Canada. Many of this distinguished family name Langlois were prominent in social, cultural, religious and political affairs in France and New France. Amongst the settlers in North America with this distinguished name Langlois were

Langlois Settlers in United States in the 18th Century

Langlois Settlers in United States in the 19th Century

Langlois Settlers in Canada in the 17th Century

Langlois Settlers in Canada in the 18th Century