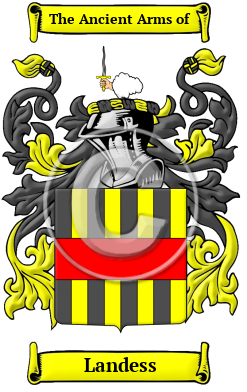 During that dark period of history known as the Middle Ages, the name of Landess was first used in France. While the patronymic and metronymic surnames, which are derived from the name of the father and mother respectively, are the most common form of hereditary surname in France, occupational surnames also emerged during the late Middle Ages. Many people, such as the Landess family, adopted the name of their occupation as their surname. However, an occupational name did not become a hereditary surname until the office or type of employment became hereditary. The surname Landess was an occupational name for a grower of lavender. Looking back further, we find the name Landess was originally from the Old English word lavendier, which indicated someone of that profession.

Early Origins of the Landess family

The surname Landess was first found in Bedfordshire, where Almaric de Landres held lands in Bedfordshire and Buckinghamshire in the 13th century. He originated in Burgundy, France with the spelling Landres which is also a commune today in Lorraine. The northern-eastern location of the name in France makes the Norman influence very probable. [1]

Early History of the Landess family

This web page shows only a small excerpt of our Landess research. Another 77 words (6 lines of text) covering the years 1550, 1659, 1575, 1665, 1217 and 1260 are included under the topic Early Landess History in all our PDF Extended History products and printed products wherever possible.

Spelling variations of this family name include: Landers, Lander, Landes, Landis, Landor and others.

More information is included under the topic Early Landess Notables in all our PDF Extended History products and printed products wherever possible.

Migration of the Landess family to Ireland

Some of the Landess family moved to Ireland, but this topic is not covered in this excerpt.
Another 208 words (15 lines of text) about their life in Ireland is included in all our PDF Extended History products and printed products wherever possible.

Migration of the Landess family