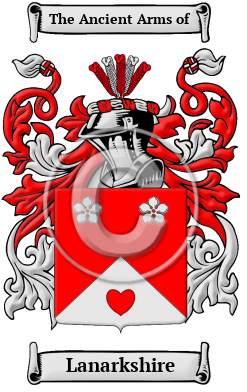 Early Origins of the Lanarkshire family

The surname Lanarkshire was first found in Argyllshire (Gaelic erra Ghaidheal), the region of western Scotland corresponding roughly with the ancient Kingdom of Dál Riata, in the Strathclyde region of Scotland, now part of the Council Area of Argyll and Bute, where they held a family seat in this wild and romantic highland territory. Their territories were first located in Lorne and they became associated as a sept of the Stewart Clan. Traditionally they are descended from an ancient Scottish king Loarn. Allegiances were important in this terrain. The Hebridean Islands and western Scotland were a refuge from Government intrusion. By the 16th century they were also found in Caithness, far to the north. Here they were associated with the Clan Gregor. Lanark is "a burgh, market-town, and parish, in the Upper ward of the county of Lanark. This place, the name of which is of uncertain derivation, is of very remote antiquity, and from the traces of a Roman road leading to the site of its ancient castle, is supposed to have been a Roman station." [1]

Early History of the Lanarkshire family

This web page shows only a small excerpt of our Lanarkshire research. Another 73 words (5 lines of text) covering the years 1177 and 1299 are included under the topic Early Lanarkshire History in all our PDF Extended History products and printed products wherever possible.

More information is included under the topic Early Lanarkshire Notables in all our PDF Extended History products and printed products wherever possible.

Migration of the Lanarkshire family