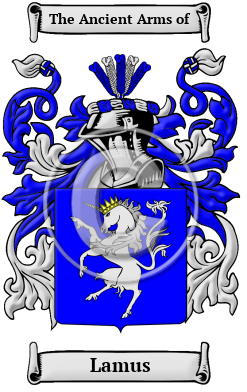 Early Origins of the Lamus family

The surname Lamus was first found in Picardy (French: Picardie) in northern France, where this eminent family held a family seat in the honor of De Limeux, a village in the ancient department of Cher in the Somme.

The family branched north into Flanders, and west into Normandy where they held considerable estates before the 16th century. They also branched to Brittany where they held a family seat at Cree'Hriou, Kerigonan, and Kerveguen.

Gabriel Lemieux, born in 1626, son of Louis and Marie (née Lugan), worked as a coppersmith in Quebec. He married Marguerite LeBoeuf, born in 1640, daughter of Guillaume and Marguerite (née Milot), on 3rd September 1658. His second marriage was to Marthe Beauregard, born in 1643, on 26th November 1671. They remained together until Marthe passed away in Lévis on 22nd October 1728. [1]

Early History of the Lamus family

This web page shows only a small excerpt of our Lamus research. Another 46 words (3 lines of text) covering the years 1598, 1659 and 1613 are included under the topic Early Lamus History in all our PDF Extended History products and printed products wherever possible.

Another 42 words (3 lines of text) are included under the topic Early Lamus Notables in all our PDF Extended History products and printed products wherever possible.

Migration of the Lamus family

Some of the first settlers of this family name or some of its variants were: Gabriel Lemieux who arrived in Quebec in 1647 from Normandy, along with Pierre Lemieux who may be presumed to be his brother or his father.