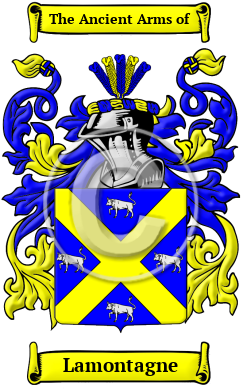 The history of the Lamontagne family goes back to the Medieval landscape of southern France, to a region known as Languedoc. It is derived from the family living on or near a hill. The surname could be translated as "dweller on the hill." Further research revealed that the name is derived from the Old French word "montaine," which means "hill."

Early Origins of the Lamontagne family

The surname Lamontagne was first found in Languedoc in south-east France where they were distinguished members of the aristocracy, and held a family seat at Montiver.

They were also in Moulines and at Poncins in Forez. This family also changed their name in Holland to Van den Bergh, where they held lands. The Moulines branch moved to Velay and preferred the spelling Montagnat. This latter branch established estates in Lyonnais to the east of Languedoc. By the 16th century the title of the Montaigne had passed to the family of Eyquem in Perigord. Michel Eyquem, Seigneur de Montaigne, 1533-1592, was a writer, moralist, and councillor of Parliament in Bordeaux, he was born at Castle Montaigne and died there.

François Lamontagne, son of Renaud and Jeanne, travelled from France to Canada in the 17th century. After arriving in Quebec he married Anne Philippe, daughter of Jacques and Anne, on 24th November 1671. They remained together in the province of Quebec until François passed away at the age of 65 on 10th April 1701. [1]

Early History of the Lamontagne family

This web page shows only a small excerpt of our Lamontagne research. Another 30 words (2 lines of text) covering the years 1533 and 1592 are included under the topic Early Lamontagne History in all our PDF Extended History products and printed products wherever possible.

There were a great number of spelling variations in French surnames. One reason for this was the wide variety of cultural influences present in France during the early development of the French language. The many spelling variations of the name include Montaigne, Montaign, Montagne, Montagnat, Mountain, Lamontaigne, Lamontagne and many more.

More information is included under the topic Early Lamontagne Notables in all our PDF Extended History products and printed products wherever possible.

Lamontagne migration to the United States +

By 1643 there were only about 300 people in Quebec. Since immigration was slow, early marriage was desperately encouraged amongst the immigrants. The fur trade attracted migrants, both noble and commoner. 15,000 explorers left Montreal in the late 17th and 18th centuries. By 1675, there were 7000 French in Quebec. By the same year the Acadian presence in Nova Scotia, New Brunswick and Prince Edward Island had reached 500. In 1755, 10,000 French Acadians refused to take an oath of allegiance to England and were deported to Louisiana. The French founded Lower Canada, thus becoming one of the two great founding nations of Canada. The distinguished family name Lamontagne has made significant contributions to the culture, arts, sciences and religion of France and New France. Amongst the settlers in North America with this distinguished name Lamontagne were

Lamontagne Settlers in United States in the 17th Century

Lamontagne Settlers in United States in the 18th Century

Lamontagne Settlers in United States in the 19th Century

Lamontagne Settlers in United States in the 20th Century

Lamontagne Settlers in Canada in the 17th Century

Lamontagne Settlers in Canada in the 18th Century

Lamontagne Settlers in Canada in the 19th Century

Lamontagne Settlers in Canada in the 20th Century