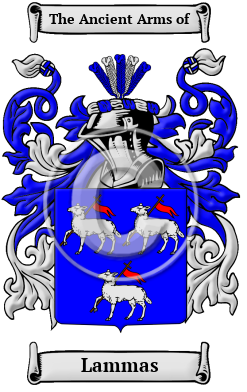 The roots of the Anglo-Saxon name Lammas come from when the family resided in the parish of Lammas in the dioceses of Norwich which was registered in the Domesday Book of 1086, as the holding of Ralph de Beaufour. This place-name may also be associated with the village of Lamarsh in the county of Essex. Lamarsh was recorded as a thriving farming community on lands held by Ranulf Peverel.

Early Origins of the Lammas family

The surname Lammas was first found in Norfolk, where they held a family seat from ancient times.

Early History of the Lammas family

The English language only became standardized in the last few centuries; therefore,spelling variations are common among early Anglo-Saxon names. As the form of the English language changed, even the spelling of literate people's names evolved. Lammas has been recorded under many different variations, including Lammas, Lamas, Lammass, Lammasse, Lammesse, Lamnesse, Lammers, Lammis, Lamis and many more.

More information is included under the topic Early Lammas Notables in all our PDF Extended History products and printed products wherever possible.

Lammas Settlers in New Zealand in the 19th Century