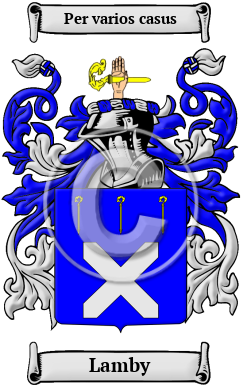 Early Origins of the Lamby family

The surname Lamby was first found in Northumberland where Robert and Henry Lambi were recorded in the Pipe Rolls of 1203. [1]

Early History of the Lamby family

Notable among the family at this time was Andrew Lamby who was one of those accused of part in the murder of David Riccio in 1565. Born in 1533, he was secretary to Mary Stuart, Queen of Scots; he helped to arrange her marriage to Henry Stewart, Lord Darnley. As the son of a musician, he went to Scotland with the Duke of Savoy's ambassador in 1561. After...
Another 67 words (5 lines of text) are included under the topic Early Lamby Notables in all our PDF Extended History products and printed products wherever possible.

Lamby migration to the United States +

Lamby Settlers in United States in the 19th Century

Lamby Settlers in West Indies in the 17th Century