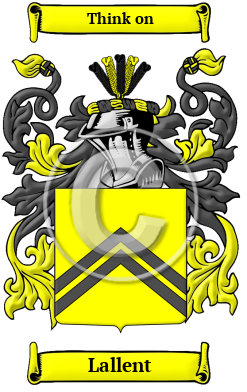 Among the clans of the Scottish/English Borderlands, the Strathclyde Britons were the first to use the name Lallent. It is derived from the son of the servant of Fillan. Fillan is derived from the word fail which means wolf. In Gaelic, the name was spelled Mac Gill Fhaolain

Early Origins of the Lallent family

The surname Lallent was first found in the former counties of Kirkcudbrightshire and Galloway where Chief Duncan MacLellan appears in a charter of Alexander II in 1217. Other early records of the surname include Gilbert M'Lolane, who lived around the year 1270. Gilbert's son Patrick, along with several others, took the castle of Dumfries from the supporters of Robert the Bruce in around 1305. Gilelbertus MacLelan was elected Bishop of Man and the Sudreys in 1325 and held the position for almost 3 years.

Early History of the Lallent family

Notable amongst bearers of this family name during their early history was Sir William Maclellan of Bombie, knighted by King James IV of Scotland, who fought for the king in the losing Battle of Flodden Field in 1513. According to folklore, McLellan threw his gauntlet at the king's feet, shook his fist and...
Another 53 words (4 lines of text) are included under the topic Early Lallent Notables in all our PDF Extended History products and printed products wherever possible.

Migration of the Lallent family to Ireland

Some of the Lallent family moved to Ireland, but this topic is not covered in this excerpt.
Another 96 words (7 lines of text) about their life in Ireland is included in all our PDF Extended History products and printed products wherever possible.

Migration of the Lallent family

Many Scots were left with few options other than to leave their homeland for the colonies across the Atlantic. Some of these families fought to defend their newfound freedom in the American War of Independence. Others went north to Canada as United Empire Loyalists. The ancestors of all of these families have recently been able to rediscover their roots through Clan societies and other Scottish organizations. Among them: Andrew McLellan, banished to New Jersey in 1685; Archibald Maclellan, who arrived in New York in 1790; Donald Maclellan, a "prisoner of the '45' sent to Barbados or Jamaica in 1745.