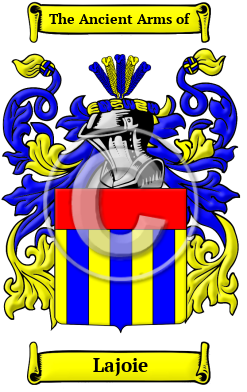 Early Origins of the Lajoie family

The surname Lajoie was first found in Languedoc, where the family held a family seat since ancient times.

Early History of the Lajoie family

Notable amongst the family name at this time was Gilles Joye (c. 1424-1483), a Franco-Flemish composer of the Renaissance; Henriette Catherine de Joyeuse (1585-1656), the daughter of Henri de Joyeuse...
Another 30 words (2 lines of text) are included under the topic Early Lajoie Notables in all our PDF Extended History products and printed products wherever possible.

Lajoie migration to the United States +

Lajoie Settlers in United States in the 20th Century

Lajoie Settlers in Canada in the 18th Century

Lajoie Settlers in Canada in the 20th Century