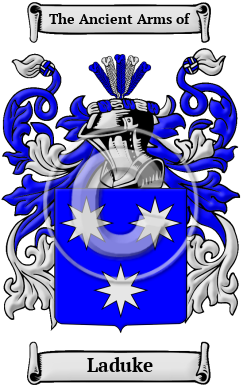 The surname Laduke is an ancient French name from Brittany. It was a name given to a person who was a person who put on the airs and graces of a Duke, or for a servant who worked in the household of a Duke.

Early Origins of the Laduke family

The surname Laduke was first found in Brittany where they held a family seat in the honor of the seigneurie of Blardais, Busnelaye, and Rouvray.

By the 13th century they also branched to St. Sulspice in Normandy. Members of the Norman branch became seigneurs, and in this region they held a family seat at Duquerie. The family gradually, over the next three or four centuries, moved eastward to île-de-France, to Hainaut and finally to Flanders (Belgium).

Jean Leduc, born in 1624, travelled from Ingre, France to Canada in 1652. After arriving in Quebec he worked as a sawyer and he married Marie Soulinie, born in 1631, on 11th November 1652. The Lords of the Isle of Montreal gave Jean an acre of land on 20th August 1655 and this is where he settled with Marie. Jean and Marie had six children together, all boys, that all have many ancestors with the name Leduc in Canada. [1]

Early History of the Laduke family

This web page shows only a small excerpt of our Laduke research. More information is included under the topic Early Laduke History in all our PDF Extended History products and printed products wherever possible.

History has changed the spelling of most surnames. During the early development of the French language in the Middle Ages, a person gave his version of his name, phonetically, to a scribe, a priest, or a recorder. Some variables were adopted by different branches of the family name. Hence, there spelling variations of the name Laduke, some of which include Leduc, Laduc, le Duc, Le Du, Ledu, Le Duc, De Ducé and many more.

More information is included under the topic Early Laduke Notables in all our PDF Extended History products and printed products wherever possible.

In the United States, the name Laduke is the 13,021st most popular surname with an estimated 2,487 people with that name. [2]

Laduke migration to the United States +

France was active as a cultural leader in the early 16th century. One particular area in which they lead was the exploration of the New World. The explorers, like Jacques Cartier in 1534, led the way to North America. Champlain, in 1608, made the first of twenty voyages to France to attract settlers and brought the first migrant in 1617. By 1675, there were 7000 French in Quebec, and the French Acadian presence in the Maritimes had reached 500. The French founded Lower Canada, thus becoming one of the two great founding nations of Canada. The family name Laduke has made many distinguished contributions in France and New France to the world of science, culture, religion, and education. Amongst the settlers in North America with this distinguished name Laduke were

Laduke Settlers in United States in the 20th Century