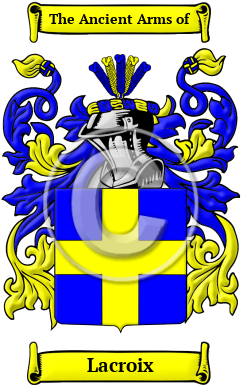 Directly translated, "la croix" means "the cross". It is believed by some sources that the name Lacroix was originally used for a person of importance in the field of religion, such as a priest or bishop. [1] Languedoc is the region of ancient France from which the name Lacroix was derived. It comes from when the family lived in Languedoc, where the family has been found since the early Middle Ages.

Early Origins of the Lacroix family

The surname Lacroix was first found in Languedoc, where this eminent family held a family seat from ancient times.

Several members of this illustrious family played a great role in the military and were recognized by their peers for their heroic actions during the wars of their times. In recognition of their contributions towards their communities, several distinctive members of this ancient family were granted lands, titles, and letters of patent confirming their nobility. This family also believed strongly in their faith and as a result, some members entered the clergy.

Beginning in 1320, Jean Lacroix is mentioned as a descendant of Guillaume of la Croix, Governor and Seneschal of Montpellier, President in the Court of Aides (Court of tax disputes) and Receiver of the Barony of Castries. Guillaume's two sons, Louis and Geoffroy, founded a family branch in Champagne from Languedoc. Jacques, grandson of Louis La Croix, was a Knight of the Order of Malta in 1568 and was the father of Gaspard and Jean. Jean, Gentleman of the Chamber to the King, was the grandfather of René Gaspard, Marquis of Castries in 1645, Lieutenant General and Knight of the Order of Malta in 1661.

The noble house of La Croix of Castries obtained six honors from the Court. Jean François Lacroix was a member of the first Commission and had missions with Danton in Belgium. He was blamed by the Commission of Twenty-One for advising Damouriez not to read his letter to the Convention and was arrested and found guilty because no one defended him except Danton.

Early History of the Lacroix family

This web page shows only a small excerpt of our Lacroix research. Another 134 words (10 lines of text) covering the years 1717, 1783, 1817, 1764, 1821 and 1783 are included under the topic Early Lacroix History in all our PDF Extended History products and printed products wherever possible.

Changes of spelling have occurred in most surnames. The earliest explanation is that during the early development of the French language, names were not yet fixed in spelling. Usually a person gave his version of his name, phonetically, to a scribe, a priest, or a recorder. This depended on accent, and local accents frequently changed the spelling of a name. Some variables were adopted by different branches of the family name. Hence, there are some spelling variations of the name Lacroix, including Lacroix, Lacrois, Lacroie, Lacroies, La Croix, Croix, Croixe, Crois, Croise, Cruce, Lacruce, La Cruce, La Croise and many more.

More information is included under the topic Early Lacroix Notables in all our PDF Extended History products and printed products wherever possible.

Lacroix migration to the United States +

In 1643, 109 years after the first landings by Cartier, there were only about 300 people in Quebec. Migration was slow. The fur trade attracted migrants, both noble and commoner. By 1675, there were 7000 French in Quebec. By the same year the French Acadian presence in the Maritimes had reached 500. The French founded Lower Canada, thus becoming one of the two great founding nations of Canada. The family name Lacroix has made many distinguished contributions in France and New France to the world of science, culture, religion, and education. Amongst the settlers in North America with this distinguished name Lacroix were

Lacroix Settlers in United States in the 18th Century

Lacroix Settlers in United States in the 19th Century

Lacroix Settlers in United States in the 20th Century

Lacroix Settlers in Canada in the 17th Century

Lacroix Settlers in Canada in the 18th Century

Lacroix Settlers in Canada in the 20th Century

Suggested Readings for the name Lacroix +