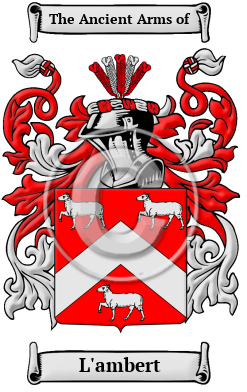 Today's generation of the L'ambert family bears a name that was brought to England by the wave of emigration that was started by the Norman Conquest of 1066. It comes from the Old German personal name Lambert or Lanbert. These names are both composed of the elements land, which means land or territory and berht, which means bright or famous.

Early Origins of the L'ambert family

The surname L'ambert was first found in Surrey where they were descended from the ancient Count of Mons and Louvain, born 940 A.D. died 1004. His three sons were Baldwin, Ralph, and Hugh Lambert. Accompanying Duke William to England at the Battle of Hastings, a Norman chief, Haco Lambert acquired lands from Duke William and is recorded in the Domesday Book.

Early History of the L'ambert family

Outstanding amongst the family at this time was John Lambarde, and English draper who served three times as Master of the Drapers' Company, an alderman and a sheriff of London; and his son, William Lambarde (1536-1601), an English antiquarian, writer on legal subjects, and politician; John Lambert (1619-1684), an English Parliamentary general and politician, imprisoned in the Tower of...
Another 59 words (4 lines of text) are included under the topic Early L'ambert Notables in all our PDF Extended History products and printed products wherever possible.

Migration of the L'ambert family to Ireland

Some of the L'ambert family moved to Ireland, but this topic is not covered in this excerpt.
Another 128 words (9 lines of text) about their life in Ireland is included in all our PDF Extended History products and printed products wherever possible.

L'ambert migration to the United States +

Many English families emigrated to North American colonies in order to escape the political chaos in Britain at this time. Unfortunately, many English families made the trip to the New World under extremely harsh conditions. Overcrowding on the ships caused the majority of the immigrants to arrive diseased, famished, and destitute from the long journey across the stormy Atlantic. Despite these hardships, many of the families prospered and went on to make invaluable contributions to the development of the cultures of the United States and Canada. Early North American immigration records have revealed a number of people bearing the name L'ambert or a variant listed above:

L'ambert Settlers in United States in the 17th Century

L'ambert Settlers in United States in the 18th Century

L'ambert Settlers in United States in the 19th Century

L'ambert Settlers in United States in the 20th Century

L'ambert Settlers in Canada in the 17th Century

L'ambert Settlers in Canada in the 18th Century

L'ambert Settlers in Canada in the 19th Century

L'ambert Settlers in Australia in the 19th Century

L'ambert Settlers in New Zealand in the 19th Century

The British first settled the British West Indies around 1604. They made many attempts but failed in some to establish settlements on the Islands including Saint Lucia and Grenada. By 1627 they had managed to establish settlements on St. Kitts (St. Christopher) and Barbados, but by 1641 the Spanish had moved in and destroyed some of these including those at Providence Island. The British continued to expand the settlements including setting the First Federation in the British West Indies by 1674; some of the islands include Barbados, Bermuda, Cayman Island, Turks and Caicos, Jamaica and Belize then known as British Honduras. By the 1960's many of the islands became independent after the West Indies Federation which existed from 1958 to 1962 failed due to internal political conflicts. After this a number of Eastern Caribbean islands formed a free association. [23]

L'ambert Settlers in West Indies in the 17th Century

Historic Events for the L'ambert family +

Suggested Readings for the name L'ambert +