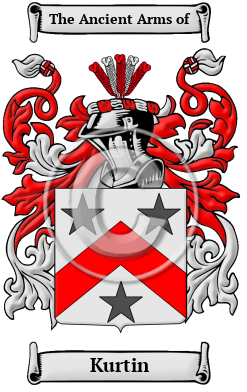 The name Kurtin is of Anglo-Saxon origin and came from when the family lived in the region of Kirkton which referred to site where a church was in Berkshire. Kurtin is a topographic surname, which was given to a person who resided near a physical feature such as a hill, stream, church, or type of tree. Habitation names form the other broad category of surnames that were derived from place-names. They were derived from pre-existing names for towns, villages, parishes, or farmsteads. Other local names are derived from the names of houses, manors, estates, regions, and entire counties.

Early Origins of the Kurtin family

The surname Kurtin was first found in Lincolnshire where "the Kirketons, ennobled by the title of Baron by Edward III., derived their name and title from Kirkton, now Kirton." [1] One of the earliest records of the family was that of Edmund Kirkton (d. 1466), the English prelate and Abbot of Westminister.

Further to the north in Scotland, "this surname appears in several records in different parts of the country and as the place name is common it is possible that persons bearing this surname are of different origin. Wilham de Kirketon appears as witness in Aberdeen in 1243. Adam de Kirketone of the county of Edneburk rendered homage in 1296." [2]

Early History of the Kurtin family

It is only in the last few hundred years that the English language has been standardized. For that reason, early Anglo-Saxon surnames like Kurtin are characterized by many spelling variations. As the English language changed and incorporated elements of other European languages, even literate people changed the spelling of their names. Scribes and monks in the Middle Ages spelled names they sounded, so it is common to find several variations that refer to a single person. The variations of the name Kurtin include: Kirton, Kirkton, Kirtman and others.

Distinguished members of the family include Edmund Kirton (d. 1466), English divine, Abbot of Westminster. He belonged to the old family of Cobbledick, but took the name Kirton, probably from the village he was born. His tomb is in St...
Another 40 words (3 lines of text) are included under the topic Early Kurtin Notables in all our PDF Extended History products and printed products wherever possible.

Migration of the Kurtin family

Many English families tired of political and religious strife left Britain for the new colonies in North America. Although the trip itself offered no relief - conditions on the ships were extremely cramped, and many travelers arrived diseased, starving, and destitute - these immigrants believed the opportunities that awaited them were worth the risks. Once in the colonies, many of the families did indeed prosper and, in turn, made significant contributions to the culture and economies of the growing colonies. An inquiry into the early roots of North American families has revealed a number of immigrants bearing the name Kurtin or a variant listed above: Phillip and Sarah Kirton settled in Barbados in 1680 with their servants; William Kirton settled in Barbados in 1673; Anthony Kirton settled in New England in 1769..