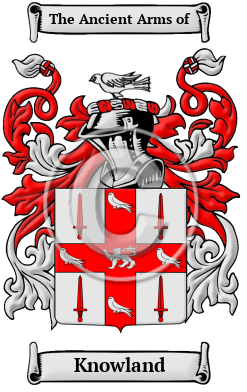 Throughout history, very few Irish surnames have exclusively maintained their original forms. Before being translated into English, Knowland appeared as Ó Nualláin, which is derived from the Irish Gaelic word "nuall," meaning "nobler, famous." [1] [2]

"Ó Nualláin, this name is numerous in all the provinces, especially in its homeland, south-east Leinster. " [3]

Early Origins of the Knowland family

The surname Knowland was first found in County Carlow (Irish: Cheatharlach) a small landlocked area located in the province of Leinster in the South East of Ireland "where they were chiefs of Fotharta Feadha, now the barony of 'Forth.' From Eochaidh Fionn-Fohart descended O'Nowlan or Nolan or Fowerty (or Foharta), in Lease (or Leix.) " [4]

Early History of the Knowland family

Just like the English language, the Gaelic language of Ireland was not standardized in the Middle Ages. Therefore, one's name was often recorded under several different spellings during the life of its bearer. Spelling variations revealed in the search for the origins of the Knowland family name include Nolan, O'Nolan, Nowlan, O'Nowlan, O'Nowland, Knowlan, Noland and many more.

Prominent amongst the family at this time was Rev. Edward Nolan (1793-1837) , Bishop of Kildare. He was born in Tullow, Co. Carlow in 1793. He was educated at Carlow College from 1804 until 1811 when he went to Maynooth College. Frederick Nolan (1784-1864), the Irish divine was born at Old Rathmines Castle, co. Dublin, the seat of his grandfather, on 9 Feb. 1784 and was third son of Edward Nolan of St. Peter's, Dublin, by his...
Another 76 words (5 lines of text) are included under the topic Early Knowland Notables in all our PDF Extended History products and printed products wherever possible.

Knowland migration to the United States +

Death and immigration greatly reduced Ireland's population in the 19th century. For the native Irish people poverty, hunger, and racial prejudice was common. Therefore, thousands left their homeland to seek opportunity in North America. Those who survived the journey and the quarantine camps to which they arrived, were instrumental towards building the strong developing nations of the United States and the future Canada. By far, the largest influx of Irish settlers occurred with Great Potato Famine during the late 1840s. These were employed as construction or factory workers. An examination of passenger and immigration lists has shown early immigrants bearing the name Knowland:

Knowland Settlers in United States in the 18th Century

Knowland Settlers in Australia in the 19th Century