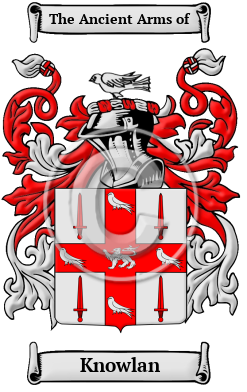 Throughout history, very few Irish surnames have exclusively maintained their original forms. Before being translated into English, Knowlan appeared as Ó Nualláin, which is derived from the Irish Gaelic word "nuall," meaning "nobler, famous." [1] [2]

"Ó Nualláin, this name is numerous in all the provinces, especially in its homeland, south-east Leinster. " [3]

Early Origins of the Knowlan family

The surname Knowlan was first found in County Carlow (Irish: Cheatharlach) a small landlocked area located in the province of Leinster in the South East of Ireland "where they were chiefs of Fotharta Feadha, now the barony of 'Forth.' From Eochaidh Fionn-Fohart descended O'Nowlan or Nolan or Fowerty (or Foharta), in Lease (or Leix.) " [4]

Early History of the Knowlan family

Within the archives researched, many different spelling variations of the surname Knowlan were found. These included One reason for the many variations is that scribes and church officials often spelled an individual's name as it sounded. This imprecise method often led to many versions. Nolan, O'Nolan, Nowlan, O'Nowlan, O'Nowland, Knowlan, Noland and many more.

Prominent amongst the family at this time was Rev. Edward Nolan (1793-1837) , Bishop of Kildare. He was born in Tullow, Co. Carlow in 1793. He was educated at Carlow College from 1804 until 1811 when he went to Maynooth College. Frederick Nolan (1784-1864), the Irish divine was born at Old Rathmines Castle, co. Dublin, the seat of his grandfather, on 9 Feb. 1784 and was third son of Edward Nolan of St. Peter's, Dublin, by his...
Another 76 words (5 lines of text) are included under the topic Early Knowlan Notables in all our PDF Extended History products and printed products wherever possible.

Knowlan Settlers in Australia in the 19th Century