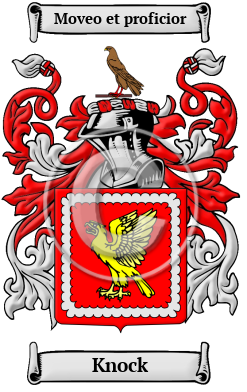 The Knock surname comes from the Old English word "cnocc," which meant a round topped hill. The surname may have been taken on by someone who lived at such a place, or may have come from one of several places called Knock, in Scotland and Northern England.

Early Origins of the Knock family

The surname Knock was first found in Renfrewshire where they held a family seat from very ancient times, some say well before the Norman Conquest and the arrival of Duke William at Hastings in 1066 A.D.

Early History of the Knock family

Spelling variations of this family name include: Knox, Knock, Knocks and others.

Notable amongst the family name during their early history was John Knox (c.1505-1572), a Scottish religious reformer, a follower of John Calvin and the driving force behind the introduction and establishment of the Presbyterian church in Scotland; and...
Another 38 words (3 lines of text) are included under the topic Early Knock Notables in all our PDF Extended History products and printed products wherever possible.

Migration of the Knock family to Ireland

Some of the Knock family moved to Ireland, but this topic is not covered in this excerpt.
Another 110 words (8 lines of text) about their life in Ireland is included in all our PDF Extended History products and printed products wherever possible.

Knock migration to the United States +

Knock Settlers in United States in the 18th Century

Knock Settlers in United States in the 19th Century