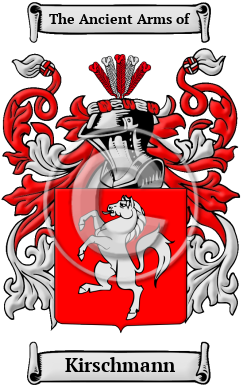 The surname Kirschmann emerged in the German state of Silesia. Before the late Middle Ages, people were known only by a single name. However, as the population increased and travelers set out on their journeys, it became necessary for people to adopt a second name to identify themselves. Many people, such as the Kirschmann family, adopted the name of their feudal occupation as their surname. However, an occupational name did not become a hereditary surname until the office or type of employment became hereditary. There are two occupations which gave rise to this name. The first is that of a church sexton, which is the meaning of the German word "kirchenære." The other occupation is that of a furrier and, in this case, the name is derived from the word "kuerschner."

Early Origins of the Kirschmann family

The surname Kirschmann was first found in Silesia, where the family was anciently associated with the political and religious conflicts of the area. They declared allegiances to many nobles and princes of early history, lending their influence in struggles for power and status within the region. The family founded numerous branches, many of which acquired manors and estates in surrounding regions, where they contributed to the prosperity of their society. The name probably derives from "Kuersch," meaning pelt, and "Kuerschner" which refers to a furrier. It is not to be confused with "Kirsch," which means cherry. Individual bearers of the name first mentioned in ancient chronicles include Ortlip Hermelin der Kuersener, who lived in Breslau, Silesia around 1360.

Early History of the Kirschmann family

This web page shows only a small excerpt of our Kirschmann research. Another 137 words (10 lines of text) covering the years 1800, 1505, 1574 and 1854 are included under the topic Early Kirschmann History in all our PDF Extended History products and printed products wherever possible.

Notables of the period with the surname Kirschmann were Magdalena Kirschmann (c. 1505-1574), birth name of Magdalena Morhart, a German printer in Tübingen. She printed nearly...
Another 26 words (2 lines of text) are included under the topic Early Kirschmann Notables in all our PDF Extended History products and printed products wherever possible.

Kirschmann migration to the United States +

Kirschmann Settlers in United States in the 18th Century

Kirschmann Settlers in United States in the 19th Century