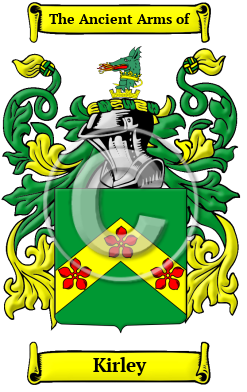 The Kirley surname is an Anglicization, derived from the Irish Gaelic "Mac Toirdhealbhaigh."

Early Origins of the Kirley family

The surname Kirley was first found in the Connacht counties of Galway and Roscommon (Irish: Ros Comáin) located in central Ireland in the province of Connacht, where the places names Ballymacurley and Curley's Island can be found. There is also legend in Ireland, that the name descends from Maolduin, the second son of the 164th Monarch of Ireland, who founded the clanns of Muldoon. Maolduin's great, great grandson was Clercen, whose name means "curly one." Clercen founded the Clan O'Cleircen, which anglicized is Curley or Curling.

Early History of the Kirley family

This web page shows only a small excerpt of our Kirley research. Another 65 words (5 lines of text) covering the years 130 and 1305 are included under the topic Early Kirley History in all our PDF Extended History products and printed products wherever possible.

More information is included under the topic Early Kirley Notables in all our PDF Extended History products and printed products wherever possible.

Kirley migration to the United States +

Kirley Settlers in United States in the 20th Century