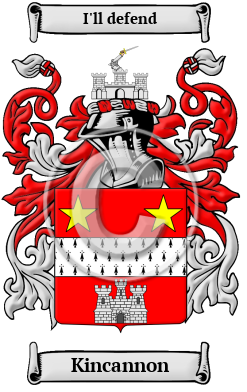 The Strathclyde-Briton people of ancient Scotland were the first to use the name Kincannon. The Kincannon family lived at Kincaid in the county of Stirlingshire. The name of Kincaith, from which the family derive their name is almost certainly of Gaelic origin, coming from the Gaelic words "ceann", meaning top or head and "caithe", meaning pass. [1] [2]

Early Origins of the Kincannon family

Early History of the Kincannon family

Medieval Scottish names are rife with spelling variations. This is due to the fact that scribes in that era spelled according to the sound of words, rather than any set of rules. Kincannon has been spelled Kincaid, Kinkeed, Kincade, Kyncade, Kinkaid and many more.

Notable amongst the family at this time was Jean Kincaid (1579-1600) who led an unfortunate life with a brutal husband, John Kincaid of Warriston. Eventually, his violent ways became too much for her to bear and she incited a servant of hers named Robert Weir, to batter the man to death with his bare fists. He was admitted by Mrs. Kincaid into her husband's chamber in his house at Warriston at an early hour on the morning of Tuesday, 1 July 1600, and he killed Kincaid with his fists. News of the murder quickly reached Edinburgh, and 'the Lady Warristoun,' 'the...
Another 171 words (12 lines of text) are included under the topic Early Kincannon Notables in all our PDF Extended History products and printed products wherever possible.

In the United States, the name Kincannon is the 17,709th most popular surname with an estimated 2,487 people with that name. [4]

Migration of the Kincannon family to Ireland

Some of the Kincannon family moved to Ireland, but this topic is not covered in this excerpt.
Another 121 words (9 lines of text) about their life in Ireland is included in all our PDF Extended History products and printed products wherever possible.

Migration of the Kincannon family

Many Scots were left with few options other than to leave their homeland for the colonies across the Atlantic. Some of these families fought to defend their newfound freedom in the American War of Independence. Others went north to Canada as United Empire Loyalists. The ancestors of all of these families have recently been able to rediscover their roots through Clan societies and other Scottish organizations. Among them: John Kincaid, who was the first Kincaid in North America, landing at Perth Amboy, New Jersey in 1683; John Kincaid, who settled in New Jersey in 1685.