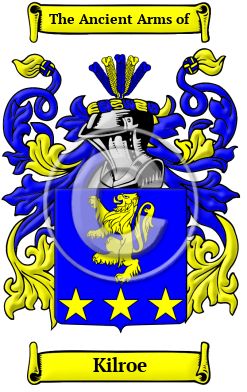 The name Kilroe has seen many modifications since the time in which it was first devised. In Gaelic it appeared as Mac Giolla Rua, which means son of the red-haired youth.

Early Origins of the Kilroe family

The surname Kilroe was first found in County Clare (Irish: An Clár) located on the west coast of Ireland in the province of Munster, where they were the Chiefs of Clonderlaw, conjecturally descended from Tiobraid, son of Iral Glunmhar, King of Ulster. [1]

Early History of the Kilroe family

This web page shows only a small excerpt of our Kilroe research. Another 148 words (11 lines of text) covering the years 1376, 1638 and 1640 are included under the topic Early Kilroe History in all our PDF Extended History products and printed products wherever possible.

The scribes and church officials of the Middle Ages who recorded names in official documents spelled the names as they sounded. This led to the problem of one name being recorded under several different variations and thus resembling more than one person. Among the many spelling variations of the surname Kilroe that are preserved in archival documents of this era include Gilroy, Kilroy, MacGilroy, MacElroy, MacGreevy, Greevy, MacGilrea, McGilroy, McElroy, McGreevy, McGilrea, MacIlrea, McIlrea, Magilroy, Magilrea, MacElry, McElry, MacIlree and many more.

More information is included under the topic Early Kilroe Notables in all our PDF Extended History products and printed products wherever possible.

Migration of the Kilroe family

Many Irish families did not fare so well within the English-ruled Ireland. Besides racial and religious discrimination, many families were renting out small tracts of farmland from absentee landowners at often unreasonable rates. Beginning in the late 18th century, moderately well off Irish families decided to emigrate to British North America or the United States in order to own their own plot of land. A radical change occurred in the 1840s, however, with the Great Potato Famine of the 1840s. Up to this point, the island's population had been increasing rapidly and a steady demand over the years for grain crops had depleted soil. Two failed crops and one poor one caused widespread disease and starvation. Thousands boarded ships looking for opportunities elsewhere. North America welcomed them as a source of cheap labor required for the many industrial and infrastructure projects underway, and as a means to quickly occupy the western regions. Research into immigration and passenger ship lists indicates that people bearing the name Kilroe were among the earliest settlers to arrive in North America: John MacElroy, who landed in Pennsylvania in 1798; and James Gilroy, who settled in Pennsylvania in 1864; they also settled in Massachusetts, New York, and California between 1765 and 1854. The Kilroys also settled in the above states between the same periods. The 1984 edition of the &quot.