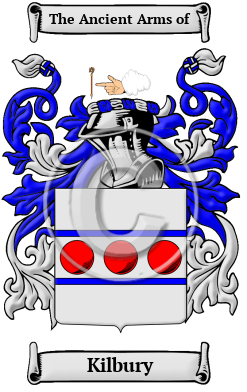 The present generation of the Kilbury family is only the most recent to bear a name that dates back to the ancient Anglo-Saxon culture of Britain. Their name comes from having lived in the region of Kilby located both in Lincolnshire and Leicestershire. Kilbury is a topographic surname, which was given to a person who resided near a physical feature such as a hill, stream, church, or type of tree. Habitation names form the other broad category of surnames that were derived from place-names. They were derived from pre-existing names for towns, villages, parishes, or farmsteads. Other local names are derived from the names of houses, manors, estates, regions, and entire counties.

Early Origins of the Kilbury family

The surname Kilbury was first found in Northumberland where they held a family seat from very ancient times, some say well before the Norman Conquest and the arrival of Duke William at Hastings in 1066 A.D.

Early History of the Kilbury family

This web page shows only a small excerpt of our Kilbury research. Another 84 words (6 lines of text) covering the years 1202, 1351, 1560, 1610, and 1620 are included under the topic Early Kilbury History in all our PDF Extended History products and printed products wherever possible.

Until the dictionary, an invention of only the last few hundred years, the English language lacked any comprehensive system of spelling rules. Consequently, spelling variations in names are frequently found in early Anglo-Saxon and later Anglo-Norman documents. One person's name was often spelled several different ways over a lifetime. The recorded variations of Kilbury include Kilby, Kilbey, Killbey, Kilbee, Kilbie, Kelby and many more.

Notables of this surname at this time include: Richard Kilby (1560-1620), an English scholar and priest. He was a graduate of Lincoln College, Oxford, which he also served as rector. He was appointed Regius Professor...
Another 34 words (2 lines of text) are included under the topic Early Kilbury Notables in all our PDF Extended History products and printed products wherever possible.

Kilbury Settlers in Australia in the 19th Century