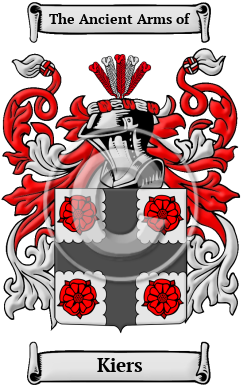 The Kiers surname is a habitational name, taken on from the place name, in Stirlingshire.

Early Origins of the Kiers family

The surname Kiers was first found in on the marches of Westere Fedale in 1242, where Patrick Ker was a juror. "Alexander del Keire had a gift of money from the king, and Andrew del Ker of Stirlingshire rendered homage in 1296 [to King Edward I of England]. William Ker was one of the burgesses of Stirling who attacked the cruives and fishings of the abbot and convent of Cambuskenneth, 1366. John Kere, burgess of Strivelyne and Mariota his wife had a charter of land in Aberdeen, 1366." [1]

Early History of the Kiers family

The frequent translations of surnames from and into Gaelic, accounts for the multitude of spelling variations found in Scottish surnames. Furthermore, the spelling of surnames was rarely consistent because medieval scribes and church officials recorded names as they sounded, rather than adhering to any specific spelling rules. The different versions of a surname, such as the inclusion of the patronymic prefix "Mac", frequently indicated a religious or Clan affiliation, or even a division of the family. Moreover, a large number of foreign names were brought into Scotland, accelerating accentuating the alterations to various surnames. The name Kiers has also been spelled Keir, Kier and others.

Another 46 words (3 lines of text) are included under the topic Early Kiers Notables in all our PDF Extended History products and printed products wherever possible.

Kiers migration to the United States +

Some of the first North American settlers with Kiers name or one of its variants:

Kiers Settlers in United States in the 17th Century

Kiers Settlers in United States in the 18th Century

Kiers Settlers in United States in the 19th Century