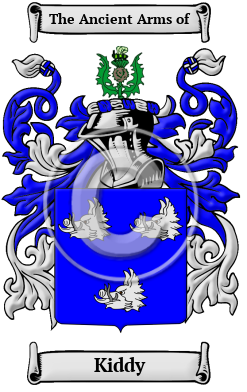 The history of the ancestors of the Kiddy family begins among the Pictish clans ancient Scotland. The name Kiddy comes from the Gaelic surname Mac Adaidh, which means son of Adam. Addie, Addy, Adie, Eadie, Eddie, and Edie are all pet forms or double diminutives of the name Adam.

Early Origins of the Kiddy family

The surname Kiddy was first found in Perthshire (Gaelic: Siorrachd Pheairt) former county in the present day Council Area of Perth and Kinross, located in central Scotland, where they held a family seat at Strathardle, in the valley of the Ardle Water.

Early History of the Kiddy family

This web page shows only a small excerpt of our Kiddy research. Another 121 words (9 lines of text) covering the years 1635, 1639, 1670, 1647, 1664 and 1670 are included under the topic Early Kiddy History in all our PDF Extended History products and printed products wherever possible.

More information is included under the topic Early Kiddy Notables in all our PDF Extended History products and printed products wherever possible.

Migration of the Kiddy family

The freedom of the North American colonies was enticing, and many Scots left to make the great crossing. It was a long and hard journey, but its reward was a place where there was more land than people and tolerance was far easier to come by. Many of these people came together to fight for a new nation in the American War of Independence, while others remained loyal to the old order as United Empire Loyalists. The ancestors of Scots in North America have recovered much of this heritage in the 20th century through Clan societies and other such organizations. A search of immigration and passenger lists revealed many important and early immigrants to North America bearing the name of Kiddy: James Kedie arrived in Pennsylvania in 1799.